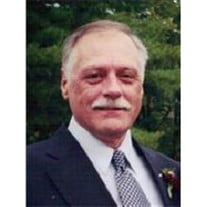 Amos Paul Hartle, 61, of Waterson Road Strattanville, passed away on Sunday, March 22, 2009, at the Cleveland Clinic in Cleveland, Ohio. Born, May 23, 1947, in Clarion, he was the son of the late Clair “Beeze” Hartle and Bessie Marie Myers Hartle of Shippenville. Mr. Hartle graduated from Immaculate Conception High School in 1965. He was married on June 21, 1969, to the former Virginia K. McGrane, who survives. Mr. Hartle enlisted in the Navy Corp and serving with the Marines during the Vietnam War. He worked for Scorce Inc. for 37 years and retired as a claims coordinator. Mr. Hartle was a member of the Immaculate Conception Church in Clarion. He was a member of the Legion #066, Moose 101, and the VFW 2145, all of Clarion.  He enjoyed tinkering with clocks, spending time outdoors, golfing with his friends and family, and spending time with grandchildren. In addition to his wife and mother, he is survived by two daughters, Christina Simpson and husband, Gus, of Corsica; Lisa Hartle and fiancé, Matt Craig, of Curllsville; and one son, Brian Paul Hartle and wife, Brandy, of Corsica; and grandchildren, Donovan Ganss, Sydney and Samantha Simpson, and Lauren and Calyssa Hartle. Also surviving are five brothers, Father Tom Hartle of Boston, Gary Hartle and wife, Marcia, of Clarion; Bruce Hartle and wife, Cheryl, of Aliquippa; Emerson “Emmy” Hartle of Shippenville; and Dave “Sub” Hartle and fiance, Stacy Rizinger, of Knox; and one sister, Martha Siegel and husband, Raymond, of Marble.  He is also survived by numerous nieces and nephews. He was preceded in death by his father. Family will receive friends from 2 to 4 and 7 to 9 p.m. Wednesday at the Robert V. Burns Funeral Home in Clarion. Mass of Christian Burial will be celebrated at 11 a.m. Thursday in the Immaculate Conception Catholic Church in Clarion with Father Tom Hartle, brother of Mr. Hartle, and Father Monty Sayers, pastor of the Immaculate Conception Church in Clarion, officiating. Following the service, military honors will be held at the Immaculate Conception Cemetery accorded by the American legion Post #66 of Clarion. Entombment will follow in the Immaculate Conception Cemetery Mausoleum. Donations and memorials can be made to Liver Research, c/o Jacqui Lemaster in reference to Amos Paul Hartle, Cleveland Clinic, 9500 Euclid Avenue, M1-0030A, Cleveland, OH, 44195.

The family of Amos Paul Hartle created this Life Tributes page to make it easy to share your memories.