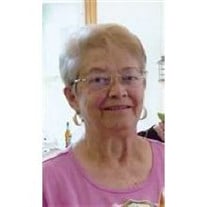 Anne M. Kerle, 81, of Clarion, was called home to the Lord on Thursday, April 17, 2014. Born October 9, 1932 in Clarion; she was the daughter of the late Joseph J. and Agnes B. Schill Kerle. Anne was a graduate of the Immaculate Conception... View Obituary & Service Information

The family of Anne M. Kerle created this Life Tributes page to make it easy to share your memories.