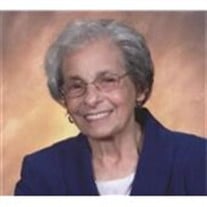 Antoinette “Pix” Babington, 85, of Laurel Brook Personal Care in Brookville, formally of Crown and Clarion, passed away on Saturday January 3, 2015 at Laurel Brook. She was born on March 6, 1929 in Alliance, Ohio, the daughter of the late August and Esther Felice Quattrochi. Pix was married on September 13, 1947 to Jack Babington who preceded her in death on October 30, 1993. Her and her husband owned and operated Jack and Toni’s Deli in Alliance, Ohio. After moving to Pennsylvania, they became the owners of the Deer Meadow camp ground in Cook Forest. She was also a dental assistant and office manager for a number of years, and she last worked at Dan Smith Candies and Gifts in Clarion. She was a member of the Immaculate Conception Church in Clarion, a member of the Women’s Guild at Saint Mary’s Catholic Church in Crown, and a member of the Scoot and Boots line dancers, and also taught line dancing. Pix enjoyed family, dancing, sporting events, and her grandchildren, and also attending her grandchildren’s sporting events. She is survived by three daughters, Missy Noll and husband Mark of Pittsburgh, Lyn Williamson and husband Dan of Kentucky, and Jackie Truman and husband Tim of Sigel, two sons, Shawn Babington and wife Shelly of Ohio and Seth Babington and wife Jill of Shippenville, twenty grandchildren, and nine great grandchildren. Pix was preceded in death by her parents, husband, one brother, Tony Quattrochi, and two sisters, Marie Purenciu and Doris Pipus. Family will receive friends from 6 p.m. to 9 p.m. on Wednesday, January 7, 2015 at the Robert V. Burns Funeral Home, 638 Wood Street, Clarion, where Christian Wake service will be held at 8:30 p.m. Mass of Christian Burial will be celebrated at 11 a.m. on Thursday, January 8, 2015 at the Immaculate Conception Church in Clarion with the rev. Monty Sayers pastor presiding. Interment will be in the Saint Mary’s Catholic Cemetery in Crown.

Antoinette &#8220;Pix&#8221; Babington, 85, of Laurel Brook Personal Care in Brookville, formally of Crown and Clarion, passed away on Saturday January 3, 2015 at Laurel Brook. She was born on March 6, 1929 in Alliance, Ohio, the daughter of... View Obituary & Service Information

The family of Antoinette A. Babington created this Life Tributes page to make it easy to share your memories.

Send flowers to the Babington family.