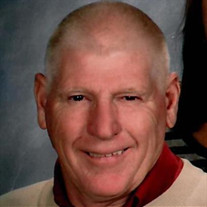 Arnold B. “Pook” Neiswonger, 70, of Corsica, passed away on Friday, February 21, 2020 at his home. He was born on May 17, 1949 in Brookville; son of the late Arnold “Tony” and Hazel Edwards Neiswonger. Arn graduated from the Clarion Limestone High School in 1967. He served in the US Army HHC 54th General Supply Group (The Big Red One) during the Vietnam War in 1969. Arn married the former Chris Judy on January 22, 1972; whom survives. He worked for Dolby’s Explosives in Corsica. Arn was a member of the Fraternal Order of Eagles #3807, the American Legion Post #066, and the VFW #2145, all of Clarion. He loved riding his trike and enjoyed fishing, gambling, and spending time with his family. Arn is survived by his loving wife: Chris, of 48 years; three children: Melissa Hill and her husband, Aaron, of Brookville, Bryan Neiswonger of Corsica, and Staci Renninger and her husband, Thad, of Strattanville; seven grandchildren: Tori Christensen and her husband, Daniel, of Brookville, Steven Hill and his wife, Abby, of Florida, Mikayla Myers of Brookville, Elly Neiswonger of Corsica, and Brayden, Caleb, and Easton Renninger, all of Strattanville; and a great granddaughter: Aliyah Christensen. He is also survived by his two sisters: Karen Neill and her husband, Randy, of Summerville and Carol Guthrie and her husband, Don, of Strattanville. Arn was preceded in death by his parents. The family will receive friends from 2 p.m. to 6 p.m. on Tuesday, February 25, 2020 at the Robert V. Burns Funeral Home in Clarion. Military Honors will be accorded by the American Legion Post #066 of Clarion at 10:45 a.m. in the funeral home on Wednesday, February 26, 2020, with a Memorial Service to follow at 11 a.m. with Rev. Nancy Zahn, pastor presiding. In lieu of flowers, Memorials or donations can be made in Arnold’s name to the Clarion Forest VNA, 271 Perkins Road, Clarion, PA 16214.

The family of Arnold B. Neiswonger created this Life Tributes page to make it easy to share your memories.

Send flowers to the Neiswonger family.