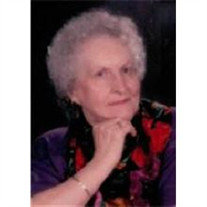 The Lord called His faithful servant Arvilla home at the tender age of 92 on December 11, 2011, as she was surrounded by her loving family.  Born July 20, 1919, in Reynoldsville, PA, she was the daughter of Harry E. and Hallie (Frantz) Grinnell.  She graduated Brookville High School in 1937 and married Benjamin G. Gathers of Clarion in 1939.  She was the loving mother of seven children and grandmother to 12 grandchildren, 13 great grandchildren and 10 great-great grandchildren. After retiring from Owens-Illinois in Clarion with 30 years of service, she continued with her career of nearly 40 years as a top-selling Avon representative earning many rewards, prizes and frequent company recognition.  She also began dividing her time between visiting her family in Pittsburgh, PA and San Jose and Ceres, CA. Arvilla is survived by three daughters:  Kathleen Johnston of Shippenville, PA; Jill Gram (Richard) of Sacramento, CA; and Brenda Petroski (Darrell) of Eighty Four, PA; one son David of Caldwell, Idaho; ten grandchildren:  Benjamin Gathers and Brian Gathers, both of San Jose, CA; Kristin Weber of Harmony, PA; SPC Meghan Weber, currently serving in Afghanistan; Clayton Petroski of Morgantown, WV; Nicole Petroski of Murcia, Spain; Kathy Ford of Post Falls, ID; Tamara Robison of Lincoln, CA; Russell Barto of Livermore, CA; and Lori Phelan of Rancho Cordova, CA; Danielle Muller and Robyn Gram, both of Sacramento, CA; and a very special cousin Faith Bogden of Cortland, OH. Preceding her in death were two infant sisters, father, mother, husband, and three sons:  Patrick (1996), Michael (2011) and Timothy (2011).  She was an active member of the First United Methodist Church of Clarion where she was the wedding coordinator and member of Group 3 for a number of years.  Other church volunteer activities included Food for Friends and Fourth Avenue Adventure.  For many years she also attended Ceres United Methodist Church in Ceres, CA and volunteered there also as the wedding coordinator and for the Food Pantry.  Arvilla was a member of Eastern Star Chapter 296 in Ceres, CA as well as a member of the Gold Emblem Club in Clarion and Red Hat Society of Shippenville. In addition to spending time with her beloved grandchildren, Arvilla was an avid reader, enjoyed baking, and also embroidering quilts for her children, grandchildren, and friends.  Her variety of delicious homemade jams and fresh-baked rolls were enjoyed immensely by her family, friends and shut-ins over the years.   Known for her caring nature and generous spirit she will continue to live on in the hearts and minds of the many lives she touched.  Always willing to lend a helping hand to those in need, she will be greatly missed by all who knew and loved her.   A memorial service will be held at 3 p.m. on Saturday, December 17, 2011, at the First United Methodist Church of Clarion with Rev. Dr. Deryl Larsen, pastor of the First United Methodist Church, and Rev. William LaVelle, pastor of the First United Methodist Church, Kane, PA officiating.  A reception will follow at the church.  Entombment service in Cedarview Memorial Park Garden Mausoleum, Strattanville, PA will be private. The arrangements are under the direction of the Robert V. Burns Funeral Home in Clarion. In lieu of flowers, donations may be made to the First United Methodist Church, 600 Wood Street, Clarion, PA 16214 or Clarion Forest VNA Hospice, 271 Perkins Road, Clarion, PA 16214.

The Lord called His faithful servant Arvilla home at the tender age of 92 on December 11, 2011, as she was surrounded by her loving family.&#160; Born July 20, 1919, in Reynoldsville, PA, she was the daughter of Harry E. and Hallie (Frantz)... View Obituary & Service Information

The family of Arvilla E. Gathers created this Life Tributes page to make it easy to share your memories.

The Lord called His faithful servant Arvilla home at the tender...

Send flowers to the Gathers family.