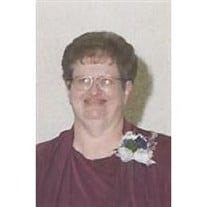 Barbara J. Miller, 63, of Millcreek Road, Clarion, died Friday, March 30, 2012, at the Allegheny General Hospital in Pittsburgh.  Born August 11, 1948, in Brookville; she was the daughter of the late Eugene C. and Virginia I. Maxwell Callihan.  Mrs. Miller was married on August 10, 1968 to James W. Miller, and he survives.  She was a 1967 graduate of Clarion Area High School.  Mrs. Miller worked as a nurse aide at the Clarion Hospital for several years.  She then worked and retired from the Chandler Dining Hall at Clarion University.  She was member of the Stitch and Chatter Club.  She enjoyed to cross-stich and read.  Her grandchildren were her life and she loved her dogs.  Mrs. Miller is survived by two daughters, Lisa Sayers and her husband, Mark, of Brockway, and Keri Pollnac and her husband, Edward, of Reynoldsville; and two grandchildren, Amayah and Jaidyn Pollnac.  Also surviving are two sisters, Kathy Lahr and her husband, Bernard, of Brunswick, GA, and Debra Glenn and her husband, Steele, of Bell Air, MD; a brother, David Callihan and his wife, Cindy, of Leeper; and several aunts, uncles, nieces, and nephews.  She was preceded in death by her parents.  Family will receive friends from 2 to 4 p.m. and 7 to 9 p.m. on Monday, April 2, 2012, and from 10 to 11 a.m. on Tuesday, April 3, 2012, at the Robert V. Burns Funeral Home, 638 Wood Street, Clarion.  Funeral services will be held at 11 a.m. on Tuesday, April 3, 2012, in the funeral home with Lay Pastor Marsha Mahle, pastor of the Shiloh Presbyterian Church, Miola, officiating.  Interment will be held in the Miola Cemetery.

The family of Barbara J. Miller created this Life Tributes page to make it easy to share your memories.

Send flowers to the Miller family.