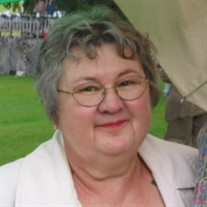 Barbara Ann Wedekind, 83, of Shippenville, formerly of Titusville, passed away early Tuesday morning, January 19, 2021 at the Butler Memorial Hospital following a lengthy illness. She was born on August 18, 1937 in Wilkes-Barre; daughter of the late Robert F. and Anella J. “Nell” Zegarski Kopicki. Barb graduated from Plains High School and then graduated from Kutztown University with a Bachelor’s of Arts in Art Education. She married the love of her life, Frank Eli Wedekind, on August 14, 1965, who preceded her in death on November 6, 2009. In her earlier years, Barb taught art at numerous schools. She then became a loving and devoted homemaker. Barb was of the Catholic faith. She was an avid Bridge player and loved sewing, baking, painting, and working on arts and crafts. Barb especially loved spoiling her grandchildren. She is survived by her son, Mark R. Wedekind and his wife, Kelly, of Eldersburg, MD; her daughter, Karen Wedekind Haugh and her husband, Roger, of Shippenville; and seven grandchildren, Alex Wedekind of Eldersburg, MD, Mara Wedekind of Greensboro, NC, Mollie Wedekind of Eldersburg, MD, Skylor Wedekind of Monroeville; and Thorin, Jaden, and Anthea Haugh, all of Shippenville. Barb is also survived by her brother, Robert Kopicki of Lewisville, TX; her sister, Doris Novelli and her husband, Joe, of Peru, NY; and numerous nieces and nephews. She was preceded in death by her parents and beloved husband. The Robert V. Burns Funeral Home in Clarion is handling the arrangements. Due to the Covid-19 pandemic, there will be no public visitation. In lieu of a reception, a celebration of life will take place in August, 2021. Interment will be held in the Wedekind Cemetery in Shippenville. In lieu of flowers, Donations can be made in Barb’s name to the Kindred Spirits Rescue Ranch, 500 Hodgson Road, Darlington, PA 16115.

Barbara Ann Wedekind, 83, of Shippenville, formerly of Titusville, passed away early Tuesday morning, January 19, 2021 at the Butler Memorial Hospital following a lengthy illness. She was born on August 18, 1937 in Wilkes-Barre; daughter of... View Obituary & Service Information

The family of Barbara A. Wedekind created this Life Tributes page to make it easy to share your memories.

Send flowers to the Wedekind family.