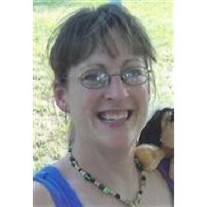 Bernadette A. “Bernie” Huefner, 52, of Brownington, Vermont, formerly of Clarion, died Monday, April 30, 2012, unexpectedly at the Newport Community Hospital in Vermont. Born July 4, 1959, in Brookville; she was the daughter of William and Martina Bauer Huefner of Clarion. Bernie graduated from Clarion-Limestone High School and later from the University of Connecticut with a degree in horticulture. She was the Director of Human Resources at Bogner of America in Willistan, VT.  She was also the coordinator of the Farmer’s Market in Newport, VT. In addition to her parents, Bernie is survived by two sisters, Jean Blachier and husband, John, of Clarion, and Marlene Baker and husband, Mike, of Strattanville; two nephews, Nathan Blachier and Wyatt Baker, and a very special niece, Emily Baker.  Also surviving is her companion, Ronald Cheney, of Vermont, and her beloved cats, Caramel, Oscar, Butterscotch, and Sammy. Family will receive friends from 1 to 3 p.m. and 6 to 8 p.m. on Sunday, May 6, 2012, at the Robert V. Burns Funeral Home, 638 Wood Street, Clarion. Mass of Christian Burial will be celebrated at 11 a.m. on Monday, May 7, 2012, at the Immaculate Conception Church, Clarion, with Rev. Monty Sayers, pastor of the Immaculate Conception Church, presiding. Interment will be held in the Immaculate Conception Cemetery in Clarion.

Bernadette A. &#8220;Bernie&#8221; Huefner, 52, of Brownington, Vermont, formerly of Clarion, died Monday, April 30, 2012, unexpectedly at the Newport Community Hospital in Vermont. Born July 4, 1959, in Brookville; she was the daughter of... View Obituary & Service Information

The family of Bernadette A. Huefner created this Life Tributes page to make it easy to share your memories.

Send flowers to the Huefner family.