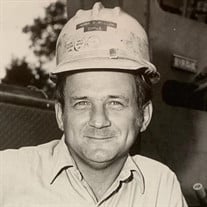 Bernard “Bun” "Bernie” Ganoe, 79, of Clarion, passed away Wednesday evening, March 2, 2022 at the Allegheny General Hospital in Pittsburgh following a lengthy illness. He was born on September 25, 1942 on the family farm in Clarion. Bun was the son of the late William E. and Cecelia Aaron Ganoe. Bernie was a 1961 graduate of Clarion-Limestone High School. He then enlisted in the US Navy, proudly serving his county from 1961 to 1965. Bun married the love of his life and bestfriend, Linda Simpson, on October 21, 1966, who survives. He was a lead lineman for West Penn Power for almost 40 years until his retirement. Bernie was a member of the Immaculate Conception Catholic Church in Clarion. He enjoyed hunting, fishing, gardening, mowing, plowing, feeding the birds, and taking rides to look for deer. Bun also enjoyed his daily McDonalds coffee and County Seat trips. He always looked forward to any event that his grandchildren were involved in. Bernie never turned down work. He was always a giving person and was proud to be a frequent blood donor. Bun is survived by his loving wife, Linda of 55 years; his children, Jody Kiser and her husband, Brad, of Corsica, Chris Ganoe and his wife, Heidi, of Miola, and Holly Megnin and her husband, Matthew of Limestone; his grandchildren who were his pride and joy, Skyler Winter and her husband, Justin, of Ohio, Felicia Zeiber and her husband, Michael, of Monaca, Kyle Kiser of Corsica, Laken Ganoe of Rhode Island, Alyssa Kiser and her fiancé, Colby Dalton, of Georgia, and Nathan Megnin and Jason Megnin, both of Limestone. Bernie is also survived by his brother, Robert “Bob” Ganoe of Clarion; 2 sisters, Mary Louise Beichner of Oil City and Kathleen Thompson of Clarion; 5 sisters-in-law, Nancy Ganoe, Nancy Ganoe, Donna Ganoe, Noreen Ganoe-Pieper, and Gayle Ganoe; along with numerous nieces and nephews and his McDonalds and County Seat buddies that he always enjoyed catching up with. In addition to his parents, Bun was preceded in death by his siblings, Dorothy Beichner, Bill Ganoe, Leo Ganoe, Clara Marie Leitch, Dick Ganoe, Ed Ganoe, Raymond Ganoe, and David Ganoe. Family and friends will be received from 1 p.m. to 4 p.m. on Sunday, March 6, 2022 at the Robert V. Burns Funeral Home in Clarion. A Christian Wake Service will be held at 4 p.m. Military Honors will be accorded by the American Legion Post #066 of Clarion at 10:15 a.m. in the funeral home on Monday, March 7, 2022. Mass of Christian Burial will be celebrated at 11 a.m. at the Immaculate Conception Catholic Church in Clarion with Rev, Monty Sayers presiding. Interment will follow in the Immaculate Conception Catholic Cemetery. The family would like to express their appreciation to the Clarion Forest VNA for the care and compassion they gave Bernie. In lieu of flowers, Memorials or donations can be made in Bernie’s name to the Clarion Forest VNA, 271 Perkins Road, Clarion, PA 16214.

The family of Bernard A. Ganoe created this Life Tributes page to make it easy to share your memories.

Send flowers to the Ganoe family.