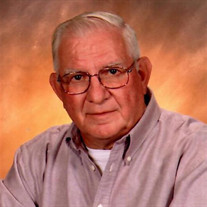 Bernard J. “Bernie” Gatesman, 79, of Shippenville, passed away suddenly on Saturday morning, January 27, 2018, at the Jefferson Manor Health Center in Brookville, where he was a resident for the past two years. He was born on November 2, 1938 in Lucinda, where he grew up. Bernard was the son of the late Bernard and Josephine Ochs Gatesman. He graduated from Farmington High School in 1956. Bernard married Thelma J. Pfendler on October 10, 1959 at the Saint Joseph’s Church in Lucinda with Father William Hall, officiating. He was employed at Joy Technologies in Franklin and retired in 2000 after 35 ½ years of service, where he was a highly skilled machinist and later rising to the role of an inspector. Bernard was a member of the Immaculate Conception Catholic Church in Clarion and also a member of the Clarion Moose Lodge #101. In his healthier days, Bernard enjoyed hunting, fishing, traveling, and playing cards at his hunting camp. He was an avid Pirates and Steelers fan, and was also an enthusiast of word games, especially crossword puzzles. Bernard is survived by his loving wife, three daughters, Cindy Knight and her husband Mike of Shippenville, Laura Hogue and her husband Andy of Knox, and Susan Easton and her husband Eric of Kossuth, a son, Bernard John Gatesman, Jr. and his wife Kim of Sewickley, ten grandchildren, Matt and Kurtis Knight, Connor and Austin Gatesman, Mitchell, Grace, and Gavin Hogue, and Sydney, Cameron, and Owen Easton, and his sister, Ruth Hepler of Clarview Nursing Home in Sligo. He was preceded in death by his parents, a son, David Wayne Gatesman, an infant daughter, Lynn Marie Gatesman, and his brothers, Joe, Chuck, and Henry Gatesman. Bernard’s family will receive friends from 10 a.m. to 11 a.m. on Tuesday, January 30, 2018 at the Immaculate Conception Catholic Church in Clarion, where Mass of Christian Burial will follow at 11 a.m. in the Church with Rev. Monty Sayers, pastor presiding. Interment will be held in the Immaculate Conception Catholic Cemetery. Bernard instilled the values of hard work and determination in all his children and there was always a garden to weed, a car to wash, a lawn to be mowed, or wood to be chopped. He was outgoing with a wonderful sense of humor, and was a popular resident at Jefferson Manor. He was involved with several weekly activities and looked forward to visiting the Pre-K counts class every week, and passing out candy and mints to the children. He always had a stash of candy nearby and enjoyed offering a piece to any visitor or guest he met. The Gatesman family would like to thank the staff at Jefferson Manor for their wonderful care. In lieu of flowers, the family suggest that memorials be made in Bernie’s name to the Immaculate Conception Catholic Church, 720 Liberty Street, Clarion, Pa 16214.

Bernard J. &#8220;Bernie&#8221; Gatesman, 79, of Shippenville, passed away suddenly on Saturday morning, January 27, 2018, at the Jefferson Manor Health Center in Brookville, where he was a resident for the past two years. He was born on November... View Obituary & Service Information

The family of Bernard J. Gatesman created this Life Tributes page to make it easy to share your memories.

Send flowers to the Gatesman family.