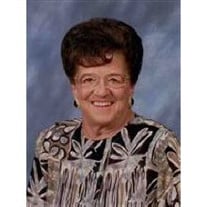 Betty L. Cherico, 83, of Jefferson Street, Callensburg, died unexpectedly Sunday, February 20, 2011, at the DuBois Regional Medical Center following a short illness. Born March 20, 1927, in Shippenville, she was the daughter of the late Nelson and Priscilla Eiseman Karg. She worked for the Owens-Illinois Glass Plant for 30 years, retiring in 1991. Mrs. Cherico was a member of the Immaculate Conception Church in Clarion. She was a former member of the Clarion VFW Women’s Auxiliary. Mrs. Cherico was an avid bowler and enjoyed gardening and spending time with her family. She is survived by two children, Deborah A. Ferringer and her husband, Ken, of Parker; and Richard T. Cherico and his wife, Regina, of Brookville; nine grandchildren; and several great grandchildren. Also surviving are six siblings, Norma Zacheral of Oil City; Theresa Pierucci and her husband, Loreno, of Sligo; Joanne Songer and her husband, Carl, of Shippenville; Judy Springer of Chicago, IL; Cathy Appleton and her husband, Dick, of DE; and Constance Karg of Allentown; and a sister-in-law, Marge Karg of Fryburg. In addition to her parents, she was preceded in death by one brother, Donald Leo “Pap” Karg and an infant grandchild. Family will receive friends from 2 to 4 p.m. and 7 to 9 p.m. on Tuesday, February 22, 2011, at the Robert V. Burns Funeral Home, 638 Wood Street, Clarion. Mass of Christian Burial will be held at 11 a.m. on Wednesday, February 23, 2011, in the Immaculate Conception Church in Clarion with Father William McGuirk, relative of family, presiding. Interment will be held in the St. Michael’s Cemetery in Fryburg. Memorials and donations can be made to Charitable Deeds, 98 Hickory Nut Lane, Knox, PA 16232.

The family of Betty L. Cherico created this Life Tributes page to make it easy to share your memories.

Send flowers to the Cherico family.