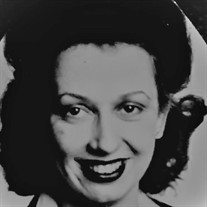 Betty P. Lutz, 95, of Clarion, passed away Sunday evening, June 7, 2020 at the Shippenville Healthcare and Rehabilitation Center after a year of declining health. She was born on July 31, 1924 in Kittanning; daughter of the late Harry and Augusta Uhl Leasure. Betty attended school in Clarion and also Pike School in Paint Township. She married Kenneth Lutz, after his return from Europe serving in WWII, at the Saint Joseph Catholic Church in Lucinda on November 27, 1945. He preceded her in death on January 12, 1984. They would have celebrated their 39th Anniversary. In her earlier years, she loved going to the Senior Center in Clarion. Betty started working at GC Murphy’s in Clarion in 1946 until her and Kenneth relocated to Altoona, where he had a job transfer with NAPA. She worked at Gable’s Department Store in Altoona for 20 years until Kenneth’s passing. Betty then relocated to Clarion and lived there for the past 36 years. She was a gifted decorator and was always dressed beautifully and had a strong passion for perfume. Betty loved life itself and always had a smile on her face. She also loved spending time with her grandchildren and going shopping. More importantly than anything else, she had a strong faith in God. Betty is survived by her son: Jerry Lutz and his wife, Mary, of Lucinda; her daughter: Jackie Love and her husband, John, of Elk City; a daughter-in-law: Peggy Brannon and her husband, Joel, of Florida; and her grandchildren: Pam Pellow and her husband, Rich, of Brandon, Rebecca Ponchotti and her husband, Jason, of Colorado, Amanda Moore and her husband, Chris, of Camp Hill, Adam Lutz and his wife, Elitha, of North Carolina, Jonathan Love of Pittsburgh, and Jillian Love of Shippenville. She is also survived by her sisters-in-law: Alice Guntrum of Rimersburg, who was very special to her always kept an eye on her, Katie Luden and her husband, Regis, of Marienville, Tip Lutz of Lucinda, Marion Lutz of Lucinda, and Barb Pflender of Vowinckel. Betty was preceded in death by her parents, loving husband, her sister: Stella Ganoe, a son: Gary Leasure; and numerous brothers-in-law and sisters-in-law. The Robert V. Burns Funeral Home in Clarion is handling the arrangements. There will be no public visitation. All services will be private. Interment will be held in the Emmanuel Lutheran Cemetery in Shippenville.

Betty P. Lutz, 95, of Clarion, passed away Sunday evening, June 7, 2020 at the Shippenville Healthcare and Rehabilitation Center after a year of declining health. She was born on July 31, 1924 in Kittanning; daughter of the late Harry and Augusta... View Obituary & Service Information

The family of Betty P. Lutz created this Life Tributes page to make it easy to share your memories.