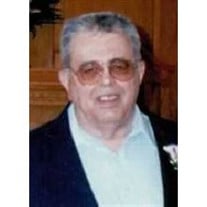 C. Rodger O’Neil, 76, of Reed Street, Clarion, died Thursday, April 1, 2010, at the Golden Living Center in Clarion. Born March 13, 1934, in Johnsonburg, he was the son of Clarence Arthur and Mary Lorraine Williams O’Neil. He was first married in 1956 to the former Shirley Smith, who preceded him in death on January 22, 1989. Rodger was then married on May 16, 1997 to the former Kay Monrean, who survives. He was a graduate of the Johnsonburg High School. A veteran, Rodger served in the Air Force for 20 years. He worked for Pinkerton Security at the Owens Illinois Glass Plant and retired after 20 years. Rodger was a member of the Kingsville United Methodist Church. He was also a member of the VFW and American Legion in Clarion, Strattanville Fire Department, Limestone Fire Department, and Clarion County Fire Police. Rodger was an avid Steelers fan.  He enjoyed hunting, fishing, coin collecting, playing Bingo, and watching television. In addition to his wife, he is survived by three children, Teri Shick of Strattanville; Tom O’Neil and wife, Linda, of Boardman, OH; and Tami Best and husband, Walt, of Strattanville. Also surviving are ten grandchildren, Tim Shick, Tracey Shick, Nikki Shick, Shawn O’Neil, Kevin O’Neil, Christian O’Neil, Megan O’Neil, Lisa Dittman, Trista Alexander, and Stephanie Best; and four great grandchildren, Halee, Mariah, Jayden, and Ethan, and with one on the way. In addition to his parents and first wife, he was preceded in death by one brother, Ken; and three sisters, Jane, Diana, and Gayle. Family will receive friends from 2 to 4 p.m. and 7 to 9 p.m. on Monday, April 5, 2010, at the Robert V. Burns Funeral Home in Clarion. Military honors will be conducted by the American Legion Post #66 of Clarion at 10:45 a.m. on Tuesday, April 6, 2010, in the funeral home. Funeral services will be held at 11 am on Tuesday, April 6, 2010, in the funeral home with Rev. James Dietrich, pastor of the New Rehoboth Greenville Presbyterian Church, officiating. Interment will be held in the Cedarview Memorial Park in Strattanville. Memorials and donations can be made to the Clarion VFW, 603 Liberty Street Clarion PA 16214.

The family of C. Rodger O'Neil created this Life Tributes page to make it easy to share your memories.

Send flowers to the O'Neil family.