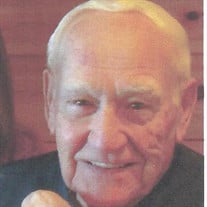 Carl Harrison Beckwith, 84, of Clarion, passed away on August 8, 2017 at the Clarion Hospital following a brief illness. He was the last surviving member of his immediate family. He was born on October 19, 1932 in Scotch Hill. The son of the late John and Ethel Knepshield Beckwith. Carl attended Clarion Limestone School. He was married on June 6, 1959 to Julia Marie Heinrich who preceded him in death. Carl served in the US Army during the Korean Conflict stationed in Austria. He worked as a lineman for a power line construction co. and also worked for various tree trimming companies and was the founder of Beckwith Construction. Carl was a member of the Immaculate Conception Church of Clarion. He was a member of the Clarion Loyal Order of the Moose #101. Carl was well known for his quick wit and “Carlisms”. He loved history, geography, playing cards with his grandchildren, sitting on his back porch and good conversations. He is survived by four children; John Beckwith and wife Amy of Clarion, Karla Trill of Clarion, Dana Beckwith and wife Edie of Emlenton and Rebecca “Becky” Kammerdeiner and husband Steve of Sigel. Carl was a loving Grandpa to; Amanda “Mandy” Coradi and husband Patrick of Clarion, Nathan Beckwith of Limestone, Rochelle “Shelly” Miller and husband Jeremy of Leeper, Justin Trill, Alexis Welsh both of Clarion, Aaron Kornhauser and wife Amanda of Wexford, Shylee Kornhauser of Pittsburgh, Abigail Beckwith and John Beckwith both of Emlenton. Great Grandchildren; Bailey Smith, Braylon and Briggs Beckwith, Leo and Mya Coradi, McKenzie Miller and Luke Coradi. He is also survived by a brother in law; Joseph McLaine of Knox and a sister in law; Donna Beckwith of Frogtown. Carl is preceded in death by five sisters; Melva Watkins, Jean Graham, Mary McLaine, Doris Baker and Vivian Beckwith. Three brothers; Joseph, Merle, and Donald Beckwith and a granddaughter in law; Kessa Beckwith. Family will receive friends on Thursday, August 10, 2017 from 2pm to 4pm and 6pm to 8pm at the Robert V. Burns Funeral Home in Clarion. A Christian wake service will be held at 4pm in the funeral home. Mass of Christian Burial will be celebrated at 2pm on Friday, August 11, 2017 at the Immaculate Conception Catholic Church in Clarion with the Rev. Monty Sayers pastor presiding. Interment will be held in the Immaculate Conception Catholic Cemetery. Carl’s family would like to thank the staff at Clarion Hospital and also the staff at Clarion Forest VNA Hospice for their care at his time of need. In lieu of flowers donations can be made to the Clarion Hospital, one Hospital Drive, Clarion, PA 16214 or the Clarion Forest VNA Hospice, 271 Perkins Road, Clarion, PA 16214

Carl Harrison Beckwith, 84, of Clarion, passed away on August 8, 2017 at the Clarion Hospital following a brief illness. He was the last surviving member of his immediate family. He was born on October 19, 1932 in Scotch Hill. The son of the... View Obituary & Service Information

The family of Carl H. Beckwith created this Life Tributes page to make it easy to share your memories.

Carl Harrison Beckwith, 84, of Clarion, passed away on August...

Send flowers to the Beckwith family.