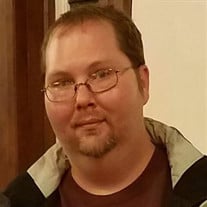 Carl M. Cunningham, 38, of Shannondale, passed away unexpectedly on Friday, August 16, 2019 at his home. He was born on July 18, 1981, in Brookville; son of Charles M. and Ollie Mae Irwin Cunningham of Shannondale. Carl grew up on the family farm and attended Brookville Area High School, graduating in 2000. He then studied the electrical trade at Triangle Tech in Dubois, PA, graduating in 2001 with an Associate degree. Working most recently for Luton’s Plumbing in Clarion, Carl was adept at learning new skills quickly. Known for his trusting, generous nature and loving heart, Carl was the supporter of the underdog and always looked for the good in others, at times to his own detriment. Although he was a man of few words, Carl’s wry sense of humor sparked a laugh at the most unexpected moments. He was a member of the Zion Lutheran Church in Shannondale. Carl enjoyed spending time with his daughters, RaeLeigh Nicole and Carly Grace Cunningham, who brought joy and love to his life. He was very proud of the strong young women they are becoming. He is survived by his parents; two beautiful daughters; his sister: Mary Morris and her husband Chuck; and many cousins, aunts, and uncles. Carl was preceded in death by both his maternal and paternal grandparents; Cecil and Kathryn Diehl Irwin and Charles S. and Mary McCall Cunningham; an uncle: Keith McCleary; and an aunt: Jane Irwin Holbrook. The family will receive friends on Friday, August 23, 2019 from 4 p.m. to 8 p.m. at the Robert V. Burns Funeral Home in Clarion. Funeral services will be held at 11 a.m. on Saturday, August 24, 2019 in the funeral home. Interment will take place in the Clarion Cemetery. In lieu of flowers, memorials or donations can be made in Carl’s name to the Zion Lutheran Church in Shannondale, 3117 Pine Run Rd, Mayport, PA 16240.

Carl M. Cunningham, 38, of Shannondale, passed away unexpectedly on Friday, August 16, 2019 at his home. He was born on July 18, 1981, in Brookville; son of Charles M. and Ollie Mae Irwin Cunningham of Shannondale. Carl grew up on the family... View Obituary & Service Information

The family of Carl M. Cunningham created this Life Tributes page to make it easy to share your memories.

Send flowers to the Cunningham family.