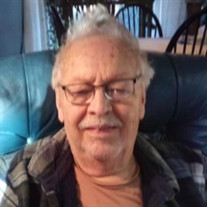 Carl H. Seamans, 82, of Fisher, passed away Thursday morning, October 14, 2021 at the Clarion Hospital. He was born on August 1, 1939 in New Castle; a son of the late Walter H. and Evelyn G. Eckert Seamans. Carl married the former Kathleen “Kathy” McCullough on December 19, 1997, who survives him. He worked as a Civil Servant in the United States Air Force for 38 years until he retired. Carl was a member of the Fryburg Sportsman’s Club. He enjoyed gardening, hunting, and spending time with his family. Carl is survived by his loving wife, Kathy of 23 years; three sons, Mike Seamans of Clinton, Tim Seamans and his wife, Margaret, of Arizona, and Todd Dame and his wife, Mary Pat, of Fisher; and four grandchildren, Connor Dame, Bowen Dame, and Griffin Dame, all of Fisher, and Emily Seamans of Arizona. He is also survived by a brother, Walter Seamans and his wife, Patricia, of New Castle; and a sister, Francis Gifford, also of New Castle. Carl was preceded in death by his parents. The Robert V. Burns Funeral Home in Clarion is handling the arrangements. Per Carl’s wishes, there will be no public visitation. A memorial service will be held at a later date.

The family of Carl H. Seamans created this Life Tributes page to make it easy to share your memories.

Send flowers to the Seamans family.