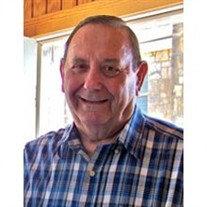 Carl J. Stiglitz, 80, of Miola passed away early Wednesday morning, June 29, 2016 at his home. He was born on August 18, 1935 in Huefner; son of the late Leo Stiglitz Sr. and Romaine Hoover Stiglitz. Carl was married on April 14, 1956 to Pauline A. Hepfl, who preceded him in death on July 13, 2004. He was a heavy equipment operator working for various coal companies including Zacherl Coal and retired from C & K Coal Company. Carl is a member of the Immaculate Conception Catholic Church in Clarion. He enjoyed tinkering around in his big garage. Carl loved watching all sports, especially the Pittsburgh teams and NASCAR. He is survived by three sons, Eugene Stiglitz and his wife Marsha, Terry Stiglitz and his wife Virginia all of Miola, and Ronald Stiglitz of Pittsburgh, and two daughters, Carol Veronesi and her husband Mike of Seminole and Tina Bauer and her husband Mark of Miola. He is also survived by eleven grandchildren and twelve great grandchildren, and his siblings, Donald Stiglitz of New Bethlehem, Robert Stiglitz and his wife Marge of Clarion, John Stiglitz and his wife Ann of Knox, Leo Stiglitz Jr. and his wife Doreen, Mary Lou Steele and her husband Elwood all of Clarion, and Sally Best and her husband Tom of Warren, PA. He was preceded in death by his parents, his wife, and a sister, Cathy. Per Carl’s wishes there will be no public visitation. Mass of Christian Burial will be held on Friday, July 1, 2016 at 11 a.m. at the Immaculate Conception Catholic Church with the Rev. Monty Sayers, pastor as presider. Interment will following in the Immaculate Conception Cemetery. In lieu of flowers, donations can be made in Carl’s name to WRC Hospice, 985 Route 28, Brookville, PA 15825 or the Clarion Cancer Center, 150 Doctor’s Lane, Clarion, PA 16214.

Carl J. Stiglitz, 80, of Miola passed away early Wednesday morning, June 29, 2016 at his home. He was born on August 18, 1935 in Huefner; son of the late Leo Stiglitz Sr. and Romaine Hoover Stiglitz. Carl was married on April 14, 1956 to Pauline... View Obituary & Service Information

The family of Carl J. Stiglitz created this Life Tributes page to make it easy to share your memories.

Send flowers to the Stiglitz family.