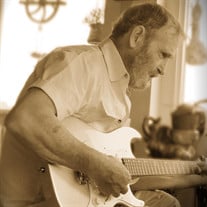 Carlis L. Stanfill, age 80, passed away on Wednesday, February 9, 2022 at the McKinley Health Center in Brookville. He was born on October 30, 1941 in Oneida, TN to the late Jesse and Martha (Terry) Stanfill. At an early age, Carlis moved with his Family to Glendale, OR where he was raised and attended high school. In high school he loved sports and played football, baseball and wrestled going to state championships all while working at the small-town gas station. Following graduation, Carlis proudly entered the military service in the US Marine Corps. He was stationed in both California and Ohau, HI. Shortly thereafter he married his high school sweet heart, Beverly Jean Johns. After his enlistment the couple settled in Klamath Falls, OR where he utilized his GI Bill and attended Oregon Technical Institute, earning his certifications as an electrician and purchasing the couple's first home. He was employed by Weyerhaeuser Co. and together they raised three daughters. Carlis’ career began as an Electrician, but he was always driven to take on more responsibility and became an Electrical Supervisor, and an Electrical Team Leader. Together they lived briefly in New Mexico before settling down again in Clarion where he retired and following Bev’s passing, eventually opened his own antique store. Carlis was a tremendously talented man. Aside from being an electrician, he was a graphite pencil artist with a fondness of the Southwest United States, woodworker large and small, jewelry maker using beads and bone, skydiver, expert marksman, motorcyclist, fabulous cook with a passion for potato soup, cornbread and bacon wrapped jalapeños, a pie aficionado who could make a crust that would never fail, country music guitar player, small engine aircraft pilot, bow elk hunter, angler, gardener of root vegetables and tomatoes, golfer on his own backyard course, Proprietor of “Antiques and Stuff”, and above all an American picker. There was nothing he could not make, repair or repurpose. He collected everything and threw away nothing. He would search the entire county for the next treasure. Unafraid to knock on the door of anyone with a barn in hopes of finding a claw foot bathtub, antique sewing machine, or old jars and glass. He was preceded in death by his parents; his wife, Beverly; and 4 brothers, James, Arthur, Rudy and Randy. Carlis is survived by his daughters, Tessa Chenoa Ownby, Tammy Stanfill and Tiffany Duncan; grandchildren, Schuyler, Jesse, and Jarron Lewis and Cadence Webber; his two brothers, Denny Stanfill (Betty), and Bill “Kim” Stanfill (Alana); along with numerous nieces, nephews and cousins. Carlis is also survived by his dear friends of Clarion County, John & Sudee Francis, John & Jess Moore, Gary and Marcia Hartle and Don Dininny. The Robert V. Burns Funeral Home in Clarion is handling the arrangements. As per his request, there will be no services held. Carlis will be laid to rest beside his wife at Hillcrest Memorial Park in Grants Pass, OR. In lieu of flowers, the family suggests donations be made in Carlis’ honor to a local Clarion charitable organization.

Carlis L. Stanfill, age 80, passed away on Wednesday, February 9, 2022 at the McKinley Health Center in Brookville. He was born on October 30, 1941 in Oneida, TN to the late Jesse and Martha (Terry) Stanfill. At an early age, Carlis moved with... View Obituary & Service Information

The family of Carlis L. Stanfill created this Life Tributes page to make it easy to share your memories.

Send flowers to the Stanfill family.