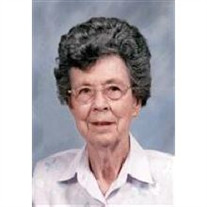 Catherine M. Zacherl, 89, of 164 Zacherl Lane, Shippenville, died Wednesday, September 28, 2011, at her home. Born March 17, 1922, in Shippenville, she was the daughter of the late Floyd J. and Mabel Cook Loll. She was married on June 2, 1943, to David Zacherl, and he survives.  Their parents were good friends; when David and Catherine were babies, they spent time together side by side in their cradles. Mrs. Zacherl was a 1939 graduate of St. Joseph High School in Lucinda and a 1940 graduate of Clarion High School. She was a member of the St. Joseph Catholic Church in Lucinda. Mrs. Zacherl was a member of the Rosary Society for several years, a former member of the Democrat Woman’s Club, where she served as President, and was formerly on the Church Parish Counsel, where she was secretary from 1976 to 1982. She loved to play scrabble, crossword puzzles, and spending winters at their home in Florida.  Flowers were her passion.  She was responsible for the beautiful flowers at the end of Zacherl Lane. In addition to her husband, she is survived by two children, Stephen C. Zacherl and  his wife,  Debra, of Shippenville; and Diane Ochs and her husband, Gerard, of Lucinda; nine grandchildren, Stephanie Zelaski and her husband, Brian, of Palmyra, VA; Shannon Zacherl of Louisa, VA; Bud Zacherl and his wife, Jessica, of Shippenville; Cody Zacherl of Shippenville; Scott Ochs and his friend, Bonnie McVay, of Lucinda; Chad Ochs ad his wife, Jill, of Carlisle; Nathan Ochs and his wife, Brenda, of Shippenville; Casey Ochs of Strattanville; and Katrina Ochs of Sligo; and two great grandchildren, Emma Zelaski of Palmyra, VA; and Cory Ochs of Shippenville. Also surviving are three siblings, Virginia Griesbaum of Pittsburgh; Verena Gowa of Sarasota, FL; and Donald Loll of Lucinda. In addition to her parents, she was preceded in death by three siblings, Florence O’Neill, Edward Loll, and William Loll. Family will receive friends from 2 to 4 p.m. and 7 to 9 p.m. on Friday, September 30, 2011, at the Robert V. Burns Funeral Home, 638 Wood Street, Clarion. Christian wake service will be held at 3:45 p.m. on Friday, September 30, 2011, in the funeral home. Mass of Christian Burial will be celebrated at 10 a.m. on Saturday, October 1, 2011, at the St. Joseph Catholic Church in Lucinda with Father William Miller, pastor of the St. Joseph Catholic Church, presiding. Interment will be held in the St. Joseph Catholic Church Cemetery. Memorials and donations can be made to the St. Joseph School, 72 Rectory Lane, Lucinda PA 16235.

The family of Catherine M. Zacherl created this Life Tributes page to make it easy to share your memories.