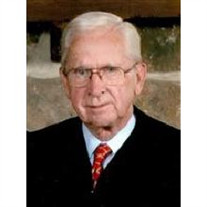 Charles Robert Alexander was admitted to the University of Pittsburgh Medical Center on the night of Wednesday, November 24, 2010 after having suffered a substantial hematoma at his home north of Leeper, Pennsylvania; From the time of his arrival at the hospital, he was kept in peaceful comfort until his passing early Monday morning, November 29, 2010. A father, husband, friend, attorney, judge, citizen and a sportsman, he served his family, friends and community in countless capacities. Whether they knew him as Judge, Chuck, Dad, Grandad or, and perhaps most appropriately, Chick E. Ball, every encounter made an impression. Chuck was the husband of Peggy Penrod Lampe Alexander and the son of George W. “Heap” and Miriam Moore Alexander. Chuck was originally married to Jean Taylor Alexander Sayer, now deceased, and later to Maxine McKinsey Kifer Alexander, also deceased. In addition to his parents and two wives he was preceded in death by his brother George (another Heap), his son James and his uncle and aunt Rex and Maxine Moore Hurd. He is survived by his son Charles Alexander of Falconer, NY; son Stephen (Nancy) Alexander of Oxford, OH; daughter-in-law Trudy Alexander of Helen Furnace, PA; niece Anne (John) Alexander Gordon of Harrisburg, PA; stepson Timothy (Wendy) Lampe of Champagne, Illinois; stepson Brad (Rhonda) Lampe of Zeeland, MI; step daughter Sandi Kifer of Clarion, PA; stepson Larry (Rhonda) Kifer, of St. Augustine, FL; aunts Irene Moore Gibson and Joan Moore of Hilton Head, SC; eighteen grandchildren; three great grandchildren; numerous cousins including Korki (Jack) Hurd Stroud, Candy Hurd Cotton, Mimi Hurd Schaper and Alan Hurd; as well as Tony and Irene Lencer. Judge Alexander attended elementary schools in Clarion and Forest counties and in Texas during World War II. One of his fondest memories of his early schooling was a one-room school taught by Lucille Cook. He graduated in 1950 from Clarion Area High School. Chuck attended Denison College in Ohio for two years where he was a member of the Beta Theta Pi fraternity. In 1952, he transferred to Clarion State College where he graduated in 1954 with degrees in English and social studies education. In the fall of that year, he enrolled in the Law School of the University of Pennsylvania. He graduated in 1957 with a juris doctorate cum laude fourth in his class and was nominated to the Order of Coif. Judge Alexander was admitted to the Bar in 1957 and began his legal career in private practice with H. Ray Pope in Clarion. For the next 31 years Chuck practiced law, seemingly specializing in most every niche in the legal field Fittingly, In 1988, he was appointed President Judge of Clarion County by Pennsylvania Governor Robert P. Casey and was elected to this position for a ten-year term in 1989. He retired as county judge in 1998, and began his career as Pennsylvania Senior Judge, which he held until July 2007. He then formed his second law partnership with his son James B. Alexander, Jack Troese and Sara Seidle. In Spring of 2009, just months after the untimely death of his son Jim, Chuck was given the rare opportunity to return to the bench. He took it, and there he remained as a Senior Judge until his death. At home, on the trout stream or in the woods, on Main Street and in the courtroom, Chuck was known for his love of a good story and its telling. He would often entertain a table of friends and family with stories about people he’d met, about his love of fishing and hunting across the globe, but especially in Western Pennsylvania, about the boyhood he shared with his brother Heap, and the pleasure he took in fatherhood and his three marriages. But with equal enthusiasm Chuck would tell you about a wonderful coincidence he had experienced last week, or of a comical mistake he had made just yesterday. For Chuck, every human interaction and every event was a story. He lived a life of brilliant episodes, each with its own importance, its own significance. To recount over dinner and a glass of wine (and occasionally even as many as two glasses) those moments, and to hear the same from others, was for Chuck a singular reflective pleasure, and it was one he enjoyed in both public and private life. Those who were fortunate enough to have enjoyed such occasions knew Judge Alexander for a loving father and husband, a committed and honest citizen and a Great Man. Though he played many roles, all who had met Chuck Alexander knew the same person. From his personal life to his public he brought compassion, and from his public life to his personal he brought fairness. He drew humor equally from both.  We recommend that donations in Chuck's honor be made to one of two groups: Considering Chuck's commitment to education, we feel that the Clarion University Foundation is well worthy of donations in the Judge's name. These memorial donations may be made out to The Clarion University Foundation and mailed to 840 Wood Street, Clarion, Pa, 16214. And in keeping with Chuck's devotion to justice in governance, we ask that contributions also be given to Families Against Mandatory Minimums (F.A.M.M.). This small organization (14 staff members) has for 20 years fought to oppose Mandatory Minimum Sentences on Federal, State and local levels.  Chuck felt very strongly about Mandatory Minimums, and even wrote a great deal on the issue, including a research collaboration with Rebecca Carroll, a Lucinda, Pennsylvania native, entitled "We’re Supposed to Sentence Individuals, Not Crimes" published in 2006. They receive donations made out to Families Against Mandatory Minimums at 1612 K Street Suite 700 Washington, D.C. 20006, The organization may be reached by phone at 202.822.6700. The family will be receiving friends at the Robert V. Burns Funeral Home, 638 Wood Street, Clarion on Friday evening (Dec 3) from 4 pm to 9 pm, and again on Saturday (Dec 4) from Noon to 3 pm and 6 pm to 9 pm.

Charles Robert Alexander was admitted to the University of Pittsburgh Medical Center on the night of Wednesday, November 24, 2010 after having suffered a substantial hematoma at his home north of Leeper, Pennsylvania; From the time of his arrival... View Obituary & Service Information

The family of Charles R. Alexander created this Life Tributes page to make it easy to share your memories.

Charles Robert Alexander was admitted to the University of Pittsburgh...

Send flowers to the Alexander family.