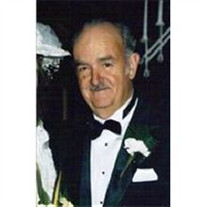 Charles Edward Shultz, 78, of Maxwell Road, Miola, passed away early Friday morning, April 3, 2009, at Brookville Hospital.Born April 22, 1930, in Bradys Bend, he was the son of Earl Webster and Anna Elizabeth Wyant Shultz. Mr. Shultz was married on August 12, 1950, to the former Claire “Kate” Maxwell, who preceded him death on January 15, 2003.   He served with the Army during the Korean War. Mr. Shultz retired as foreman of the Sheet Metal Department of Conair in Franklin after 22 years. He was the owner of Shultz Sheet Metal Shop in Miola.   He enjoyed his cats and dogs, farming, and raising beef cattle and horses. Mr. Shultz was a member of the Fryburg Sportsman’s Club.   He is survived by son, Donald Shultz and wife, Carol, of Miola; daughter, Kristin Ann Shultz of Miola; and companion of six years, Elinor Robinson of Miola.   Also surviving are brothers, Joseph Shultz and wife, Esther, of Fenelton; Dan Shultz of East Brady; sisters, Eleanor Gerner and husband, Walter, of Sarver; Judy Crawford and husband, Raymond, of East Brady; Barbara Zimmerman of Clintonville; Helen Whitmer and husband, Clifford, of Emlenton; Marilyn Rankin and husband, James, of Rimersburg; Susan Yockey of Worthington; and sister-in-law, Vivian Hook and husband, John, of Franklin. He is also survived by numerous nieces and nephews.   In addition to his parents and wife, he was preceded in death by son, Edward Shultz; brothers, Guy Shultz, James Shultz, and Earl T. Shultz; and sisters, Rose Hester, Carolyn Stoughtman, and Sally Shultz. Family will receive friends from noon to 2 p.m. and 4 to 6 p.m. tomorrow at the Robert V. Burns Funeral Home in Clarion.   Military honors will be conducted at 10:45 a.m. Monday in the funeral home accorded by the American legion Post #66 of Clarion. Services will be held at 11 a.m. Monday at the funeral home with Pastor Tom Pesci, pastor of the East Brady Baptist Church, officiating.   Interment will be held in the Miola Cemetery. Donations and memorials can be made to the American Cancer Society, 320 Bilmar Drive, Pittsburgh PA 15205, or to the Clarion PAWS, PO Box 804, Clarion PA 16214.

The family of Charles Edward Shultz created this Life Tributes page to make it easy to share your memories.

Send flowers to the Shultz family.