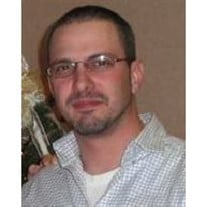 Charles Franklin “Charlie” Shultz II, 36, of Clarion, passed away on Saturday, October 10, 2015 at his home from natural causes.   He was born on May 1, 1979, in Tyrone, Pennsylvania; the son of Charles F. Shultz and wife Robin of Tyrone and Cynthia Staley and husband Richard of Clarion.   Charlie was a 1998 graduate from Tyrone High School where he participated in track & field, and was on the golf team. He enjoyed hunting, fishing, and being outdoors. He was a handyman that could fix nearly anything and loved working on cars. For everyone who knew Charlie, they know how good of a pool player he was. For those who didn't know how good he was, usually ended up buying him a drink.   He was a person who was always there for friends and family in a time of need. “Happy”, as most friends and family knew him, always knew how to make people smile. He was fun loving and a joy to be around. He will be truly missed by all those who knew him.   Charlie was of the Catholic Faith and was also a member of the Clarion VFW Post #2145.   In addition to his parents, Charlie is survived by his two children Ethan and Paige Shultz of Warriors Mark, his maternal grandmother, Marsha DelBaggio and his paternal grandmother, Eva-Gene Shultz both of Tyrone, his grandparents, Jack and Lucy Staley of Clarion, his brothers and sisters, Kyla Bell of Missouri, Ricky Staley and wife Kelley of Pittsburgh, Bart Staley and wife Val of Chambersburg, Tori Amsler and husband Jason of Shippenville, Cara Carpin, Germanus Carpin, Jarrod Carpin, and Mikey Staley all of Clarion, Josh Hampton of Martinsburg, and Dakota Little of Lancaster, and along with numerous aunts, uncles, cousins, and several nieces and nephews.   Charlie was preceded in death by his maternal grandfather George DelBaggio, his paternal grandfather Charles Shultz, and step father Germanus Daniel Carpin.   Family will receive friends from 5 p.m. to 7 p.m. on Thursday, October 15, 2015 at the Robert V. Burns Funeral Home, 638 Wood Street Clarion.   In lieu of flowers donations can be made to the Clarion VFW Post #2145 for the Wounded Warriors, 603 Liberty St, Clarion, PA 16214.

The family of Charles F Shultz created this Life Tributes page to make it easy to share your memories.

Send flowers to the Shultz family.