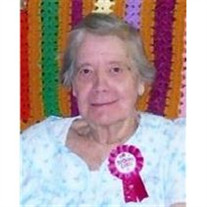 Long time Knox resident, Charlotte Grace Brindley Caldwell, 90, passed away peacefully in her home on Thursday, December 19, 2013 after a brief illness.  Her daughter, Sara was with her when she passed.    Born August 5, 1923 in Germaino, Ohio, she was the daughter of the late Della Clutz Brindley.    She was married on December 15, 1945 to Melvin G. Caldwell, who preceded her in death.   Charlotte retired from Clarion University of Pennsylvania in 1988 after twenty years of secretarial service in the Admissions office.  She was an avid Bridge player for over fifty years.   She was a member of the First Presbyterian Church in Clarion.   Charlotte was the longest living member of her immediate family and celebrated her ninetieth birthday this past August with her children, grandchildren and two great grandchildren.    Charlotte is survived by a son, David Caldwell and his wife, Christy, of Topeka, Kansas, and two daughters, Sara Porter of Knox and Lisa Stewart and her husband, Eric, of Elkhart, Indiana; seven grandchildren, Albert Caldwell of Augusta, Georgia, Jane Leger of Kansas City, Kansas, David Grant Caldwell of St. Joseph Missouri, Amy Nevison and her husband, Steve, of Huron, Ohio, Eric Stewart and his wife, Patty, of Sturgis, Michigan, Stephanie Porter and Nathan McHale of DuBois, and Sonya Porter Weaver and her husband, Steve, of Knox; sixteen great grandchildren; one great, great grandchild; and a dear friend, Sarah Kahle, who she considered one of her granddaughters.   Charlotte was preceded in death by her husband, Melvin, her brother, Neale Brindley and his wife, Barbara.   At her request, there will be no visitation.  The arrangements are under the direction of the Robert V. Burns Funeral Home, 638 Wood Street, Clarion.   Interment will be held in Knox Union Cemetery.   The family requests donations be made to the Clarion Forest VNA Hospice, 271 Perkins Road, Clarion PA 16214.

Long time Knox resident, Charlotte Grace Brindley Caldwell, 90, passed away peacefully in her home on Thursday, December 19, 2013 after a brief illness.&#160; Her daughter, Sara was with her when she passed.&#160; &#160; Born August 5,... View Obituary & Service Information

The family of Charlotte G. Caldwell created this Life Tributes page to make it easy to share your memories.

Send flowers to the Caldwell family.