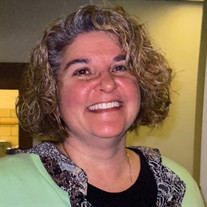 Cheryl Lynn Tack, 56, of Shippenville, passed away on Monday, February 18, 2019 at the Sugar Creek Rest Skilled Nursing Home in Worthington. She was born on November 10, 1962 in Kittanning; daughter of Edward and Irene Frick Hoffman of East Brady. She graduated in 1981 from East Brady High School and also graduated in 1983 from the Armstrong County X-ray School. After school, she worked at the Clarion Hospital and in Washington DC as an X-ray Technician before returning to the area, where she was owner of McKinney Mechanical and then became a homemaker. Cheryl married Andrew Tack on May 18, 1985, and he preceded her in death. Cheryl was a member of the First Baptist Church in Clarion. She enjoyed crafting, singing in the choir at church, and was a volunteer at the AAA Pregnancy Center and also at the Immaculate Conception Catholic School, both of Clarion. Cheryl is survived by her parents, three children; Patrick Tack of Shippenville, Levi Tack of Maryland, and Lyda Tack of Shippenville, two sisters; Sherry Hoffman Stacey and her husband Dave of New York and Karen Wallace and her husband Jim of California, and numerous nieces and nephews. She was preceded in death by her husband and her father-in-law and mother-in-law, Kenneth and Nancy Tack. The Robert V. Burns Funeral Home in Clarion is handling the arrangements. The family will receive friends from 6 p.m. to 8 p.m. on Friday, February 22, 2019 at the Snyder-Crissman Funeral Home in Cowansville. Additional visitation will be held from 10 a.m. to 11 a.m. on Saturday, February 23, 2019 at the First Baptist Church in Clarion, where funeral services will follow at 11 a.m. in the church with Rev. Jason Hunter, presiding. Interment will take place at the Montgomeryville Baptist Cemetery in Adrian. The family would like to thank their First Baptist Church family and the staff at the Sugarcreek Rest Home for their care. In lieu of flowers, donations can be made in Cheryl’s name to the First Baptist Church in Clarion, 649 Main Street, Clarion, PA 16214.

Cheryl Lynn Tack, 56, of Shippenville, passed away on Monday, February 18, 2019 at the Sugar Creek Rest Skilled Nursing Home in Worthington. She was born on November 10, 1962 in Kittanning; daughter of Edward and Irene Frick Hoffman of East... View Obituary & Service Information

The family of Cheryl L. Tack created this Life Tributes page to make it easy to share your memories.

Cheryl Lynn Tack, 56, of Shippenville, passed away on Monday,...

Send flowers to the Tack family.