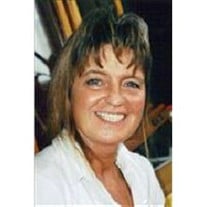 Cindy Wolf, 49, of Medina, Ohio, formerly of Clarion, died unexpectedly Thursday morning, December 4, 2008, at her residence. She was born March 4, 1959, in Brookville, and was the daughter of the late Harold Swigart and Clara Blair Swigart of Shippenville. Cindy graduated from Clarion-Limestone High School in 1975. She married Rollie Wolf on May 12, 1984, and he survives. Cindy enjoyed spending time with grandchildren and children, gardening, watching John Wayne movies, and listening to music. She was a homemaker and a dedicated Christian. In addition to her husband and mother, she is survived by her daughter, Shylo Neely and her husband, Al, of Ohio; her son, Mason Wolf and his wife, Stephanie, of Ohio; step-son, Christopher Wolf of Pittsburgh; step-daughter, Nicole Wolf of Pittsburgh; and grandchildren, Zachary Neely of Ohio, Joseph Wolf of Pittsburgh, and soon to be expected, Holly Marie Wolf. She is also survived by her father-in-law, George Wolf of Clarion; brother, Ted Swigart of Tucson, Arizona; sister, Carol Carnahan and her husband, Doug, of Shippenville; nephew, Kurt Carnahan, and wife, Jessica, of Knox; niece, Bobby Joe Swigart of Arizona; and numerous other nieces and nephews and brother and sister-in-laws. She was preceded in death by her father, Harold Swigart, and mother-in-law, Carolyn Wolf. Viewing will be 2 to 4 p.m. and 7 to 9 p.m. Sunday at the Robert V. Burns Funeral Home in Clarion. Funeral Services will held at 11 a.m. Monday in the funeral home with Rev. Betsy Cooper, pastor of the Shippenville United Methodist Church, officiating. Interment will be in the Herman Cemetery in New Bethlehem. Donations can be made to the family or the Shippenville United Methodist Church.

Cindy Wolf, 49, of Medina, Ohio, formerly of Clarion, died unexpectedly Thursday morning, December 4, 2008, at her residence. She was born March 4, 1959, in Brookville, and was the daughter of the late Harold Swigart and Clara Blair Swigart... View Obituary & Service Information

The family of Cindy Wolf created this Life Tributes page to make it easy to share your memories.

Send flowers to the Wolf family.