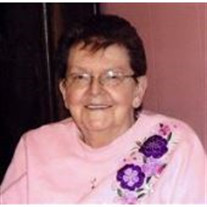 Clarice &#8220;Daisy&#8221; Wheeler, 82, of Laurelbrooke Landing in Brookville, formerly of Strattanville, passed away on Thursday, March 12, 2015, at the Laurelbrooke Landing where she made her home for the past six years and everyone made... View Obituary & Service Information

The family of Clarice J. Wheeler created this Life Tributes page to make it easy to share your memories.

Send flowers to the Wheeler family.