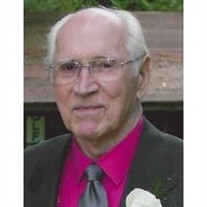 Retired Funeral Director, Cleo A. Hawk, 84, of Sligo left our sides on Sunday, January 8, 2017 at home surrounded by his family. He was born on October 15, 1932 in Sligo; son of the late Guy and Gladys Hetrick Hawk. He married Patricia Stitt on February 4, 1955, who preceded him in death. Cleo was a graduate of Union High School in 1951. After graduation he worked at the Eric Steel Mill before joining the Marine Corp. where he served from 1953 through 1955. Upon leaving the Service, Cleo attended Mortuary School in Pittsburgh where he apprenticed from 1956 through 1957. He and his father, Guy, ran the Hawk Funeral Home for many years until Cleo purchased the Family Business. He ran ambulance and held many Funeral Services for families in Sligo and the surrounding communities. Cleo was instrumental in helping start what is known today as the Community Ambulance Service. He was a member of the Sligo Lions Club, he also served on the Board of Directors for Clarion Hospital and built Sligo’s Post Office. After retiring, he and his wife, Pat, wintered at their home in Florida. Besides traveling, woodworking, hunting, and fishing, Cleo and Pat enjoyed spending time at the river, boating, and hosting their annual Hawaiian Luau. Later in life, Cleo looked forward to playing cards with his buddies and most enjoyed time spent with family and friends. He is survived by his two daughters, Ellen Rettinger and her husband Jeff of Oil City and Joyce Hawk and her husband Matt of Pittsburgh, and his son, Gordon Hawk and his wife Donna of Rimersburg. Cleo was devoted to his children as well as his three grandchildren, Korey Hawk and his wife Kara of Sligo, Rory Bowler of Pittsburgh, and Abbey Burns and her husband Billy of Curllsville. His pride and joy was his five great grandchildren, Kennedi, Kohlton, and Kalli Hawk, Karson Bowler, and Nolan Burns. Family will receive friends from 2 p.m. to 4 p.m. and 7 p.m. to 9 p.m. on Wednesday, January 11, 2017 at the Burns Funeral Home and Crematorium, Inc. in Rimersburg. Military Honors will be accorded by the American Legion Honor Guard Post #0454 and the VFW Post #7132 of Rimersburg at 10:45 a.m. on Thursday, January 12, 2017 in the Funeral Home where Funeral Services will follow at 11:00 a.m. with Rev. Stephanie Weaver, pastor of the Sligo Presbyterian Church. Interment will follow in the Sligo Cemetery. Memorials or donations can be made in Cleo's memory to the Southern Clarion County Ambulance Service, 10515 Route 68, Rimersburg, PA 16248. Cleo had a great sense of humor, loving to tell jokes and stories. He hoped to be remembered for his extensive service to his community as well as his great love for his family.

Retired Funeral Director, Cleo A. Hawk, 84, of Sligo left our sides on Sunday, January 8, 2017 at home surrounded by his family. He was born on October 15, 1932 in Sligo; son of the late Guy and Gladys Hetrick Hawk. He married Patricia Stitt... View Obituary & Service Information

The family of Cleo A. Hawk created this Life Tributes page to make it easy to share your memories.

Retired Funeral Director, Cleo A. Hawk, 84, of Sligo left our...

Send flowers to the Hawk family.