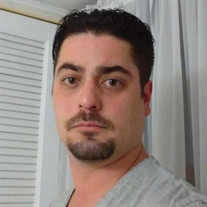 Corey J. Rominski, 34, of Limestone, passed away early Wednesday morning, February 9, 2022. He was born on December 11, 1987 in Clarion; son of John A. and Mary Jo Renninger Rominski, who survive. He attended Clarion Limestone High School. Corey worked as a supervisor at Commodore Homes in Shippenville. He was a member of the Saint Nicholas Catholic Church in Crates. Corey enjoyed cooking, hunting, fishing, hiking, camping, and learning about anything, especially the outdoors. But most of all, he cherished his time with his boys, Landon and Lucas. Corey is survived by his parents, John and Mary Jo of Strattanville; his sons who were his pride and joy, Landon and Lucas Rominski of Strattanville; his siblings, Annie Schreckengost of Strattanville, Johnny Rominski of New Bethlehem, and Janey Rominski of Strattanville; his niece, Eden Schreckengost; and his nephew, Kyler Schreckengost, both of Strattanville; and numerous aunts, uncles, and cousins. He is also survived by the mother of his children, Kelli Holabaugh Rankin on Strattanville. He was preceded in death by his paternal grandparents, John Rominski Jr. and Judith Guthrie; his maternal grandparents, Ed and Jane Renninger; and his aunt, Karen Speer. The Robert V. Burns Funeral Home in Clarion is handling the arrangements. Per Corey’s request, there will be no public visitation. A celebration of life will be held at a later date. In lieu of flowers, donations can be made to Corey’s parents, John and Mary Jo, at 78 Willow Lane, Strattanville, PA 16258 to help with his boys’ future.

The family of Corey J. Rominski created this Life Tributes page to make it easy to share your memories.

Send flowers to the Rominski family.