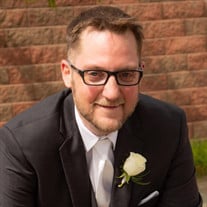 Craig Vincent Beary, 34, of Pottstown, formerly Clarion, passed away on Sunday, August 30, 2020 with his family at his side following complications from his second lung transplant. He was born on January 31, 1986 in Clarion; beloved son of Richard “Curly” and Cynthia Wakefield Beary of Clarion. Craig attended Immaculate Conception Catholic School and graduated from Clarion Limestone High School in 2004. He then graduated from Clarion University in 2009. He was also a member of the Immaculate Conception Catholic Church in Clarion. Craig worked as a 911 Dispatcher for Clarion County for 10 years and most recently for Montgomery County. Craig loved his job. He was the happiest as a husband to Melinda “Mindy” Warnsing Beary. Craig and Mindy were married June 8, 2019 in Brookville with many friends and family celebrating their big day. They had a love that was indescribable. Craig and Mindy were the love of each other’s lives. He enjoyed life itself. Craig never let his health issues define him. He spent his childhood with close friends and family and loved spending time with his Grandma Wakefield. His IC days made friends that have lasted forever. High School at C-L continued his love for sports, music, and socializing. College days included intramurals, Diversity club, WCUC TV Station, attending concerts and MMA fights, watching Pirates, Steelers, and Penguin’s games, and road trips to anywhere. He especially loved coaching IC basketball with his friend, Curt. Mindy brought additional happiness and adventure. They enjoyed board games, playing punch bug, trips to Sam’s Club, Ichiban, and Cozumel. Craig and Mindy were able to travel to many places in the eastern US. They also spent two weeks backpacking in Europe, England, Paris, Germany, Switzerland, and Italy for their honeymoon. He had the privilege of meeting his stem cell donor, Mathias Schaller and his wife, Rebecca, of Germany. In addition to his wife and parents, Craig is survived by his aunt: Paula Kuzma of Johnstown; his uncles: Raymond Beary of West Virginia and Michael Beary and his wife, Theresa, of Ohio; his grandmother: Theatis Beary of Clarion; his fur children: Zoey and Zena; and many extended family members. Craig was preceded in death by his paternal grandparents: Lloyd and Dorothy Beary; maternal grandparents: Jake and Elma Wakefield; an uncle: Paul Kuzma, his father-in-law: James Warnsing; and his special hairless cat: Cleo. Craig’s family will receive friends from 2 p.m. to 7 p.m. on Wednesday, September 2, 2020 at the Robert V. Burns Funeral Home in Clarion. A Christian Wake Service will be held at the conclusion of visitation. Due to Governor Tom Wolf’s mandate, we are only permitted to have 25 people in the building at a time. Please limit your stay inside during visitation so we can accommodate all who would like to pay their respects. Mass of Christian Burial will be celebrated at the Immaculate Conception Catholic Church on Thursday, September at 11 a.m. with Rev. Monty Sayers presiding. Interment will be held in the Immaculate Conception Catholic Cemetery. Craig was a long term blood bank donor and supported CORE after his experience with stem cell and lung transplants. The family wish to thank his caregivers at the UPMC Lung Transplant Center and Hillman Cancer Center. In lieu of flowers, Memorial contributions, if desired, can be made in Craig’s name to a charity of one’s choice.

Craig Vincent Beary, 34, of Pottstown, formerly Clarion, passed away on Sunday, August 30, 2020 with his family at his side following complications from his second lung transplant. He was born on January 31, 1986 in Clarion; beloved son of Richard... View Obituary & Service Information

The family of Craig V. Beary created this Life Tributes page to make it easy to share your memories.