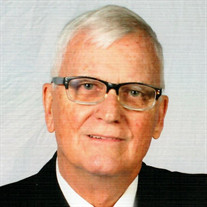 Darl H. “Butch” Callen, Jr, 83, of Clarion, passed away unexpectedly due to a Stroke early Sunday morning, August 1, 2021 while vacationing in Salisbury, Maryland. He was born on March 14, 1938 in East Brady; son of the late Darl H. Callen, Sr. and Helen Elizabeth Henry Callen. After graduating from the former Sligo High School, Butch received a Degree in Mechanical Engineering from Penn State. He served as a Navy Pilot in the US Navy from 1960 to 1967 and flew A4’s off of the Carrier Oriskany during Vietnam. Butch married the former Madelon “Pink” Delp, who survives. He retired from Delta Airlines after flying for numerous years as a Commercial Pilot. Butch was a member of the Immaculate Conception Catholic Church in Clarion where he was a part of the Knights of Columbus 4th Degree Council 7459. He enjoyed snow-skiing, water-skiing, and boating and camping on the Allegheny River with his grandchildren. Butch also enjoyed traveling to every Continent, including Antarctica, but most of all, Butch loved spending time with his grandchildren. Butch is survived by his loving wife, Pink; a step-son, Geoff Campbell and his wife, Julia, of Cape Coral, Florida; two granddaughters, Alexandra Ray Campbell and Victoria Scilla; two grandsons, John Kramer and AJ Scilla; his brother, Michael Callen and his wife, June, of Virginia; his sister, Sue Cassaro and her husband, Joe, of Harrisburg; and numerous nieces and nephews. He was preceded in death by his parents. The family will receive friends from 2 p.m. to 4 p.m. and 6 p.m. to 8 p.m. on Thursday, August 5, 2021 at the Robert V. Burns Funeral Home in Clarion with a Christian Wake Service to be held at the end of the calling hours. Military Honors will be accorded by the American Legion Post #66 at 10:30 a.m. on Friday, August 6, 2021 in the funeral home with Mass of Christian Burial to be celebrated at 11 a.m. at the Immaculate Conception Catholic Church in Clarion with Rev. Monty Sayers presiding. Interment will take place in the Immaculate Conception Catholic Mausoleum. In lieu of flowers, Memorials or donations can be made in Butch’s name to the Clarion County Historical Society, 17 South 5th Avenue, Clarion, PA 16214.

The family of Darl H. Callen, Jr. created this Life Tributes page to make it easy to share your memories.

Send flowers to the Callen family.