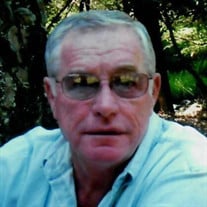 David H. Armagost, 79, of Corsica, passed away early Wednesday morning, December 8, 2021 at the McKinley Health Center in Brookville following a long battle with dementia. He was born on March 22, 1942 in New Castle; son of the late Roy E. and Mable J. Wike Armagost. Dave was a 1961 graduate from Clarion Limestone High School. He married his bestfriend and love of his life, Nancy Clark, on October 27, 1962 at the Saint Ann Catholic Church in Corsica, who survives him. Dave was a heavy equipment operator for the Operating Engineers Local 66 in Pittsburgh until his retirement. He attended the Immaculate Conception Catholic Church in Brookville. Dave was a life member of the Brookville Eagles Club #983. He loved sports and always enjoyed attending his children’s and grandchildren’s sporting events. Dave also enjoyed hunting, watching western movies, cookouts, walking on his in-law’s farm property, and Corsica’s 4th of July Celebration every year. Most of all, he loved spending time with his family. Dave is survived by his loving wife, Nancy of 59 years; his son, Robby Armagost of Corsica; his daughter, Stacy Wiles and her husband, Jeff, of Roseville; 3 grandchildren, Gracie Wiles of Pittsburgh, and David and Ayden Wiles, both of Roseville; 2 step-grandchildren, Austin Wiles of South Carolina and Erin Fitzgerald of Hermitage; and 4 step-great grandchildren, Kaylin, Bryce, and Reagan Fitzgerald, and Mason Wiles. He is also survived by his brother, LeRoy “Spark” Armagost and his wife, Mary Ann, of Lucinda; his sister, Cindy Bell and her husband, Randy, of Strattanville; a sister-in-law, Cathy Neal and her husband, Walt, of Brookville; along with numerous nieces and nephews. In addition to his parents, Dave was preceded in death by his step-mother, Shirley E. Leadbetter Armagost Seigworth, who helped raise him; his step-great grandson, Gabriel Fitzgerald; a sister, Mary V. Beichner; a sister-in-law, Sally Bish; and brother-in-law, Larry Bish. Family and friends will be received from 3 p.m. to 4 p.m. on Friday, December 10, 2021 at the Robert V. Burns Funeral Home in Clarion with a memorial service to follow at 4 p.m. in the funeral home with Lay Minister James Porter presiding. Interment will take place in the Saint Ann Catholic Cemetery at a later date. The family would like to extend a special thank you to the employees, both past and present, at McKinley Health Center who lovingly cared for Dave while residing there for 3 years. They would also like to thank the Clarion Forest VNA Hospice for their expedient and compassionate care they gave Dave. In lieu of flowers, the family suggests donations be made to the Corsica Volunteer Fire Company, 201 Main Street, Corsica, PA 15829.

David H. Armagost, 79, of Corsica, passed away early Wednesday morning, December 8, 2021 at the McKinley Health Center in Brookville following a long battle with dementia. He was born on March 22, 1942 in New Castle; son of the late Roy E. and... View Obituary & Service Information

The family of David H. Armagost created this Life Tributes page to make it easy to share your memories.

Send flowers to the Armagost family.