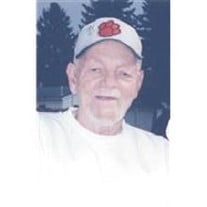 David “Red” Bevevino, 82, of Hillcrest Lane, Shippenville, died Friday morning, February 17, 2012, at the home is daughter, Janie, where he resided for the past six and half years. Born February 16, 1930, in Warren; he was the son of Joseph A. and Jane Lytle Bevevino. He was married on December 14, 1952 to the former Janice Wagner, who preceded him in death. A veteran, he served in the Army. Mr. Bevevino was a 1948 of Warren Area High School.  He then graduated from the Clarion State Teacher’s College in 1953. In 1952, he led the Clarion Teacher’s College Football team to an undefeated season ending with a victory in The Lion’s Bowl where he was named the game’s MVP.  He was inducted into the Clarion University’s Sports Hall of Fame in 1991. Mr. Bevevino was a member of the Immaculate Conception Church in Clarion. He worked as a school teacher for Clarion Area High School for 12 years, three years at Keystone High School, and 20 years at A-C Valley, where he retired in 1992.  He was a coach of football, basketball, track, baseball, and cheerleading in the Clarion area, including stints at Immaculate Conception, Clarion Area, Keystone, and A-C Valley. Mr. Bevevino was a member of the Northwest Coaches Association and was a PIAA certified official. He especially enjoyed watching his grandchildren participating in athletic events and after was often seen at local sporting events as a loyal Clarion Bobcat fan. Mr. Bevevino is survived by four children, Mark Bevevino and his wife, Jean, of Algonquin, IL; D.J. Bevevino and his wife, Patti, of Clarion; Janie Campbell and her husband, Mike, of Shippenville; and Lori Johnston and her husband, Dan, of DuBois; eleven grandchildren, Amy Bevevino and her husband, Shane O’Dell, Matthew Bevevino and his wife, Kristi, Ross Sandora and his wife, Liz, Erika Bevevino, Ben Bevevino, Emily Sandora, David McCleary, A.J. Bevevino, Drew McCleary, Adam Bevevino, and Patrick Johnston; and three great grandchildren, Bryan, Jonathan, and Lucy. Also surviving are four siblings, Abigail Wolf of Warren, Mark Bevevino and his wife, Fran, of Warren; Frank Bevevino and his wife, Carole; of Dallas, PA; and Joseph B. Bevevino and his wife, Beth, of Dallas, PA. He was preceded in death by his parents and wife. Family will receive friends from 6 to 8 p.m. on Sunday, February 19, 2012, and from 2 to 4 p.m. and 6 to 8 p.m. on Monday, February 20, 2012, at the Robert V. Burns Funeral Home, 638 Wood Street, Clarion. Christian wake service will be held at 8 p.m. on Monday, February 20, 2012, in the funeral home. Mass of Christian Burial will be held at 11 a.m. on Tuesday, February 21, 2012, in the Immaculate Conception Church, Clarion, with Rev. Monty Sayers, pastor of the Immaculate Conception Church, presiding. Interment will be held in the Immaculate Conception Cemetery. Memorials and donations can be made to the CUP Athletic Scholarship Fund.

The family of David "Red" Bevevino created this Life Tributes page to make it easy to share your memories.

Send flowers to the Bevevino family.