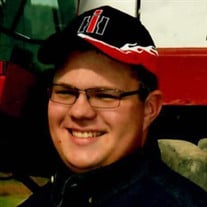 David E. “Davey” Over, 25, of Sligo, passed away on Wednesday, February 26, 2020 due to a snowmobile accident in Maine. He was born on December 8, 1994 in Brookville; son of Vern E. Over, Jr. and Amy J. Henry Over of Sligo. Davey was a 2013 graduate of Clarion Area High School and Clarion County Career Center in the Diesel Mechanics program. Farming with his dad, mom, and sister was in his blood. Davey had been operating farm equipment from the time he was eight years old. His favorite was always the combine. Davey was very passionate about working on the fifth generation, Over Farms, that one day he would have taken ownership of. His favorite saying was “When the last kernel of corn comes out the combine, it’s snowmobiling time!” Davey loved going to Maine to snowmobile with his dad and friends. Maine and its beautiful scenery were by far his favorite place to go. He has an unshakable faith in the Lord that came from his time on the farm with his family. He was a member of the Monroe Chapel across from Blossom the “Big Cow” on their family farm. Surviving are his best friends and loving parents; his sister: Susie Over of Sligo; his grandmothers: Eileen Henry and Barb Over; aunts and uncles: Wendy Kennedy, Ron and Bobbi Jo Yoder, Chad Henry, Sherri and Barry Crissman, and Terry and Pam McCleay; and his cousins: Cody, Windy, and Caleigh Kennedy, Tyrel, Hannah, and Briella Stockwell, Ross Reid, Lance and Shanelle Fancher, Terry McCleary III, and Kennedy Henry. Davey was also survived by many friends: Buck and Missy Elliott, David and Mona Weaver, Garett Holben, Donnie Doverspike, Keaton Stants, Joe and Marlene Hartzell, Doug Hetrick, Rob Burns, and Jumbo. He was welcomed into Heaven by his grandfathers: Wendell Henry and Vern “Farmer” Over, Sr.; his uncle: Ron Kennedy; his cousin: Sean Kennedy; and his great uncle: Windy Over. There are many things we loved about Davey. The ones that we will miss the most are his beautiful smile, quick wit, and infectious laugh. He was the type of person who would do anything for you and make you feel important. Davey was truly a gentle giant to his family. Words can’t express how much he will be missed by everyone. His family will especially miss the same evening conversations with his dad, “What time for in the morning boss?” or his evening text to his mom, “In. Night. Love you too.” The family will receive friends from 3 p.m. to 8 p.m. on Monday, March 2, 2020 at the Robert V. Burns Funeral Home in Clarion. Funeral services will be held at 11 a.m. on Tuesday, March 3, 2020 in the funeral home with Rev. Carol Brown, pastor of the Monroe Chapel Methodist Church in Sligo. Interment will follow in the Over Family Cemetery.