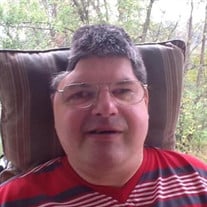 David Byron Smith, 58, formerly of Bethel Park, passed peacefully on Sunday evening, July 12, 2020 at ManorCare Whitehall in Pittsburgh. Born in Red Bank, New Jersey on March 25, 1962, he was the son of the late R. Byron Smith and Mary Ellen Smith who currently resides in Marietta, Georgia. David was born with a seizure disorder and encephalitis that was causing potential life ending brain damage. When he was 3 years old, he endured his 11th brain operation, in which a Hemispherectomy was performed. It was a last resort and, still true today, extremely rare. With the love and support of his family, amazing doctors, supportive caregivers and teachers, David surpassed expectations and became a living miracle. With an always kind and loving disposition, he exuded a calming, compassionate and positive manner that was truly contagious. David attended The Pathfinder School for exceptional children in Bethel Park, until he was 21 years old. Afterward, he worked in sheltered workshops and attended day programs throughout the Pittsburgh area. In 1986, David moved into his first home away from home. He moved into independent group home for disabled adults called Southwinds. Southwinds was lovingly created by a group of mothers who had adult children ready for more independence. One of those moms was David’s very own mother. He thrived having amazing roommates, loving staff and the comradery of “being on his own”. With the onset of some major health issues, it was necessary for David to leave Southwinds in 2019 and make his new home at ManorCare-Whitehall. The staff quickly fell in love with him and new friendships were made. David loved all Pittsburgh sport teams, especially the Pittsburgh Steelers. He was so excited to receive an autographed jersey, football, and photo of Ben Roethlisberger from the Pittsburgh Steelers for his 50th birthday. As a child, he loved going camping with his family. He traveled to dozens of states and visited many wonder places. One of his favorites was a surprise trip to Disney World with his brother, Bruce. After that, they created their own elite duo that they called “The Brothers”. Not to make his sister feel left out, he lovingly referred to her as his “favorite sister”. In spite of so much brain trauma, David had a quick wit and a corny sense of humor. He was always smiling, he always said “please” and “thank you” and had the ability to make you view the world through rose colored glasses. His passion for life and his love of his family was undeniable. His survivors include his mother, Mary Ellen Smith; his brother, Bruce Bradford Smith of Sandy Springs, Georgia; his sister Barbara Ellen Smith Funk, and her husband Eric, Sr. and their children Jessica and Eric, Jr. of Shippenville. David is also survived by his close family friend and neighbor, Chris Van Dyke and his wife, Heidi, of Bethel Park. He was preceded in death by his father, R. Byron Smith. The Robert V. Burns Funeral Home in Clarion is handling arrangements. There will be no public services at this time. When it is safe for social gatherings, a Celebration of Life will be announced. The family requests that any desired gift of love be made through an online donation to Southwinds, Inc. (southwindsinc.org) so that David’s friends may continue to live their lives filled with independence, dignity and inclusion.

The family of David B. Smith created this Life Tributes page to make it easy to share your memories.

Send flowers to the Smith family.