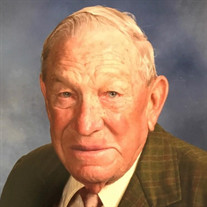 David J. Zacherl, 96, of Shippenville, passed away early Sunday morning, March 24, 2019 at his home. He was born on November 14, 1922 on the ancestral farm in Arthurs; the eldest of six children born to Stephen and Amy Baines Zacherl. Dave attended a one room elementary school in Arthurs, he then went to Saint Joseph High School and graduated from Knox High School. He was married to Catherine Loll on June 2, 1943, and she preceded him in death on September 28, 2011 after 68 years of marriage. Raised on the family farm, he mastered the technique of agriculture under his father and took over the farm’s operation at age 19 when his father died. Dave later turned the family farm into a major agri-business in North West Pennsylvania. He specialized in the cultivation and growth of potatoes, cabbage, and grain and started Zacherl’s Farm Market that is still in operation today. He was a member of the Saint Joseph Catholic Church in Lucinda, where he was the oldest male member. Dave was past Grand Knight of the Clarion County Council #4216 of the Knights of Columbus. He was also a member of the Fryburg Sportsman’s Club, the exclusive board of the Clarion County Extension Service, the Paint Township Industrial Development Corp., and the Pennsylvania Potato Growers Association. Dave was director of the Clarion County Soil Conservation for 12 years. He was a 47-year member and served 4 years as President of the Pennsylvania Vegetable Growers. Dave was a member of the Clarion County Chapter of the American Red Cross. Both, Dave and his wife took an active interest in political and civil affairs. He served as Clarion County Democrat Chairman for 12 years and also State Committeeman. He is survived by his son, Stephen Zacherl and his wife Debra of Shippenville, his daughter, Diane Ochs and her husband Gerard of Lucinda, nine grandchildren, and ten great grandchildren. David is also survived by his three sisters, Ruth Hook of Saint Petersburg, Florida, Alice Zacherl of Lake Wales, Florida, and Helen Goldeski of Pittsburgh. He was preceded in death by his parents, wife, and two sisters, Dorothy Lewis and Grace Dean. The family will receive friends from 2 p.m. to 4 p.m. and 6 p.m. to 8 p.m. on Wednesday, March 27, 2019 at the Robert V. Burns Funeral Home in Clarion. Mass of Christian Burial will be celebrated at 10 a.m. on Thursday, March 28, 2019 at the Saint Joseph Catholic Church in Lucinda with the Rev. Joseph Czarkowski, pastor presiding. Interment will follow in the Saint Joseph Cemetery. Memorials or donations can be made in David’s name to the Clarion Forest V.N.A. Hospice, 271 Perkins Road, Clarion, PA 16214 or to the Clarion Cancer Center, 150 Doctors Lane, Clarion PA 16214.

David J. Zacherl, 96, of Shippenville, passed away early Sunday morning, March 24, 2019 at his home. He was born on November 14, 1922 on the ancestral farm in Arthurs; the eldest of six children born to Stephen and Amy Baines Zacherl. Dave... View Obituary & Service Information

The family of David J. Zacherl created this Life Tributes page to make it easy to share your memories.