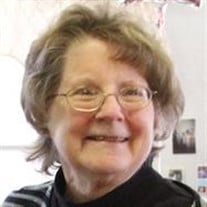 Debra Lynn Sloan Dean, 68, of Knox, passed away peacefully due to extended illness on Sunday, June 16, 2019 at Clarion Hospital. Debra was a devoted wife and mother. In a lovely coincidence she was born on Mother’s Day and passed away on Father’s Day. She will be sorely missed. Debra was born on May 13, 1951 to Harold and Bernice Sloan of Titusville, PA. One of seven children she is survived by her mother Bernice Sloan, 4 sisters; Karen (James) Wilshire, Sheryll (Perry) Bruder, MaryLou (Duane) Northrop, and Cassie (James) Vildusea as well as one brother Eric Sloan. She was preceded in death by her father Harold and brother Samuel. She has 13 nieces and nephews. Debra is survived by her devoted husband John Walter Dean of Knox. They were married on July 20, 1974 at St. Titus Catholic Church in Titusville. They were married for 45 wonderful years. She is also survived by her two loving sons Michael and Matthew. Known to most as Debbie Dean, she graduated from Titusville High School in 1969 and received her Bachelor’s Degree in Elementary Education from Clarion University in 1973. She worked in the healthcare field for Franklin Hospital, “The Old” Clarion Hospital, the current Clarion Hospital, Jefferson Manor in Brookville, and Clarion Development Corporation. Debbie was a lifelong supporter of educating young people. She provided a local day care service for 5 years. She was active in the PTA at Keystone Elementary. She spent considerable time volunteering with local Boy Scout and Cub Scout organizations. She also served as coordinator for Cub Scout leadership training for 5 years. In her personal time, she enjoyed gardening, cooking, and was a Scrabble enthusiast. Christmas was her favorite time of year. She was well known for having an extensive collection of Christmas decorations including nearly 300 Santa Clauses. She annually decorated 3 Christmas trees in her home. The family will receive friends on Thursday, June 20, 2019 from 2:00 to 4:00 and 6:00 to 8:00 p.m. at the Robert V. Burns Funeral Home in Clarion. A funeral service will be held for friends and family on Friday, June 21, 2019 at 11:00 a.m. in the funeral home with Rev. Monty Sayers, pastor of the Immaculate Conception Catholic Church in Clarion. Interment will be held at the St. Stephens Catholic Church Cemetery near Titusville, PA. In lieu of flowers, the family would like donations to be made to St. Stephens Catholic Church, Clarion Hospital, or your local troop or pack of The Boy Scouts of America.

Debra Lynn Sloan Dean, 68, of Knox, passed away peacefully due to extended illness on Sunday, June 16, 2019 at Clarion Hospital. Debra was a devoted wife and mother. In a lovely coincidence she was born on Mother&#8217;s Day and passed away... View Obituary & Service Information

The family of Debra L. Dean created this Life Tributes page to make it easy to share your memories.

Debra Lynn Sloan Dean, 68, of Knox, passed away peacefully due...

Send flowers to the Dean family.