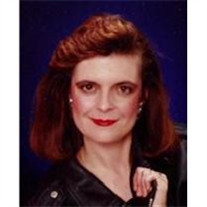 Debra Ann Fye, 54, of Knox, died Saturday, December 29, 2012, at her home surrounded by her family. Born June 18, 1958 in Oil City; she was the daughter of the late Ray B. and Ruth Ann Murray Whitmer. Debra was married on July 8, 1978 to Michael Fye, and he survives. She was a 1976 graduate of Keystone High School.  She then graduated from Clarion University with a bachelor’s degree in Accounting. She worked as an accountant at Troese and Associates of Clarion for many years.  She then worked as the Business Manager at the AC Valley School District until she developed Alzheimer’s Disease. Debra was a member of the St. Paul’s Lutheran Church in Knox. She has served as a Den Leader of the Cub Scouts and was also a Girl Scout Leader. Debra was devoted daughter, mother, and wife.  In earlier years, she enjoyed ceramics and cross-stitching.  The last few years of her life, she loved riding the motorcycle with her husband. She is survived by her husband, Mike; a daughter, Autumn Fye and her companion, Rick Leadbetter, of Clarion; and a brother, Danny Whitmer and his wife, Tammy, of Pittsburgh. She was preceded in death by her parents, a brother, Rodney Whitmer, and a son, Patrick Fye. Family will receive friends from 2 to 6 p.m. on Tuesday, January 1, 2013, at the Robert V. Burns Funeral Home, 638 Wood Street, Clarion. Funeral services will be held at 11 a.m. on Wednesday, January 2, 2013, in the funeral home with Rev. Karen Parsh, pastor of the St. Paul’s Lutheran Church of Knox, and Rev. Dan Myers, pastor of the Mt. Joy United Methodist Church in Knox, co-officiating. Interment will be held in the St. Paul’s Lutheran Church Cemetery in Knox. Memorials and donations can be made to the Clarion Forest VNA, 271 Perkins Road Clarion, PA 16214.

The family of Debra Ann Fye created this Life Tributes page to make it easy to share your memories.

Send flowers to the Fye family.