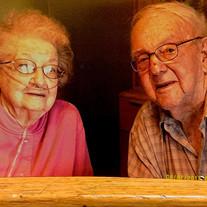 Dennis A. Schwabenbauer, 97, and Dorothea A. Schwabenbauer, 94, of Shippenville, both passed away 6 hours apart on Thursday, January 2, 2020. Dennis, being the gentleman he was, let her go first. He was born on July 26, 1922 in Lucinda; son of the late Aloysius J. and Edith J. Gatesman Schwabenbauer. She was born on November 8, 1925 in Lucinda; daughter of the late Edward and Theresa Schmader Steiner. They were married on June 5, 1947 and just celebrated their 72nd Anniversary. Dennis served in the United States Army during the WWII Battle of the Bulge and is survived by his close friend: Michael Seery, whom he served with. Dennis worked most of his life as a self-employed truck driver and also worked for Knox Glass. Dorothea worked as a Bank Teller at the First Seneca Bank in Shippenville for 21 years. They both were members of the Immaculate Conception Catholic Church in Clarion. Dennis was also a member of the Goldwing Touring Association, riding until he was 89 years old, the American Legion Post #66 of Clarion, and the Knights of Columbus. Dorothea was a charter member of the Nydill Chapter of Embroiders Guild for 25 years and mastered many techniques of embroidering. She also belonged to the Pennsylvania Ohio Needlepoint Guild for many years. Dorothea taught many types of embroidering at classes for the Saw Mill Center of the Arts in Cooks Forest. Dennis enjoyed listening to Bluegrass and Dorothea enjoyed collecting art glass and stamps. They also enjoyed camping and traveling, especially to Alaska and Germany. Dennis and Dorothea are survived by their two sons: Thomas A. Schwabenbauer and his wife, Angela, of Cranberry and Stephen M. Schwabenbauer and his wife, Debra, of Knox; eight grandchildren: Kyle Schwabenbauer and his wife, Kim, Lissa Strang and her husband, Steven, Corry Eisenman and his wife, Brittany, Jeremy Eisenman and his wife, Jennifer, Nicholaus Schwabenbauer and his wife, Jessica, Joshua Schwabenbauer and his wife, Ashley, Zack Schwabenbauer, and Samantha Ferguson and her husband, JJ; 16 great grandchildren; numerous nieces and nephews; and a special niece: Linda Steiner Mander and her husband, Chuck. He is also survived by his brother: Arthur Schwabenbauer and his wife, Joan, of Coatesville; two sisters: Mary Jane Jadlocki and her husband, Robert, of North Carolina and Diane Bauer and her husband, Ray, of Lucinda; and his sister-in-law: Freda Schwabenbauer of Clarion. Dennis was preceded in death by his parents; three brothers: Leon, Regis, and Robert; and a sister: Alberta. Dorothea was preceded in death by her parents; a sister: Grace; and two brothers: Edward and James. They were both preceded in death by their son: Edward “Bear”; daughter: E. Annie; and a grandson: Adam. The family will receive friends from 2 p.m. to 4 p.m. and 6 p.m. to 8 p.m. on Sunday, January 5, 2020 at the Robert V. Burns Funeral Home in Clarion. Military Honors will be accorded by the American Legion Post #066 of Clarion at 10:15 a.m. in the funeral home on Monday, January 6, 2020, with Mass of Christian Burial to follow at 11 a.m. at the Immaculate Conception Catholic Church with Rev. Monty Sayers, pastor presiding. Interment will be held in the Immaculate Conception Catholic Cemetery. In lieu of flowers, donations or memorials can be made in their name to the Saint Joseph Catholic School or the Immaculate Conception Catholic School.

Dennis A. Schwabenbauer, 97, and Dorothea A. Schwabenbauer, 94, of Shippenville, both passed away 6 hours apart on Thursday, January 2, 2020. Dennis, being the gentleman he was, let her go first. He was born on July 26, 1922 in Lucinda; son... View Obituary & Service Information

The family of Dennis & Dorothea Schwabenbauer created this Life Tributes page to make it easy to share your memories.