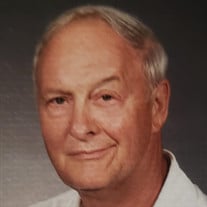 Dennis P. Stewart, 76, of Clarion, passed away on Saturday, March 30, 2019 at the Clarion Hospital Emergency Room. He was born on April 17, 1942 in Beaver Falls; son of the late Stanley G. Stewart and Retha Shick Stewart Winters. Denny married Sandy McCleary on July 22, 1960, and she survives. He worked at the Owen’s Illinois Glass Plant for 37 years, retiring in 2000. Denny was a member of the Trinity Point Church of God in Clarion. He was also a member of the Clarion Moose Lodge #101 and the Clarion Masonic Lodge #277. Denny enjoyed raising and breeding coon hounds. He also loved hunting deer and turkey, the outdoors, gardening, and his dog, Girl. Denny is survived by his loving wife; three daughters: Kimberly Stewart and Kelly Hagen, both of Clarion and Rhonda Clinger and her husband Mark of Sligo; two sons: Denny Stewart and his wife Michelle of Strattanville and Jeff Stewart and his fiancé Jimi of Clarion; ten grandchildren: Arthur Clinger and his wife Gretchen, Angela Clinger, Bryan Hagen, Jen Hagen, Jamie Northey and her husband Wade, Mark Clinger, Jr. and his wife Paige, Tyler Clinger and his wife Alicia, Glenn Stewart and his wife Samantha, Benjamin Stewart, and Jordan Stewart; along with nine great grandchildren. He is also survived by his sister: Dianna Shoemaker and her husband Terry of New York. Denny was preceded in death by his parents; step-father: Donald Winters; and two son-in-laws: Arthur Clinger and Gary Hagen. The family will receive friends from 2 p.m. to 4 p.m. and 6 p.m. to 8 p.m. on Tuesday, April 2, 2019 at the Robert V. Burns Funeral Home in Clarion. Funeral Services will be held at 11 a.m. on Wednesday, April 3, 2019 in the funeral home with Rev. Bruce Wilson, pastor of the Trinity Point Church of God. Interment will follow in the Cedarview Memorial Park in Strattanville.

The family of Dennis P. Stewart created this Life Tributes page to make it easy to share your memories.

Dennis P. Stewart, 76, of Clarion, passed away on Saturday, March...