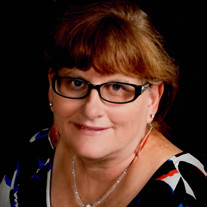 Diane M. Ochs, 67, of Lucinda, lost a courageous fight against Myelodysplasia Syndrome on Monday evening, June 24, 2019 at the McKinley Health Center in Brookville. She was born on January 19, 1952 in Pittsburgh and was adopted at the age of 6 months by the late David J. and Catherine M. Loll Zacherl. Diane married Gerard M. “Bird” Ochs on November 20, 1971, and he survives. She was a loving and devoted wife, mother, and grandmother. Diane was a member of the Saint Joseph Catholic Church in Lucinda. She was also a member of the Rosary Society. Diane was a past secretary for the District 2 Trappers Association and helped with the Lion’s Club dinners in Knox. She enjoyed going to rendezvous and sitting around the campfire listening to the stories with an adult beverage. Diane also enjoyed spending time with her grandchildren and keeping in touch with her family and friends on Facebook. On her bucket list, she wanted to cross the Mackinac Bridge in Michigan and tour the New England states in the fall to see the leaves. Diane is survived by her loving husband; four sons: Scott A. Ochs and his friend Bonnie McVay of Lucinda, Chad E. Ochs and his friend Kelly Richwine of Camp Hill, Nathan P. Ochs and his wife Brenda of Summerville, SC, and Casey G. Ochs of Tidioute; a daughter: Katrina L. Beham and her husband Frank of East Brady; and three grandchildren: Cory T. Ochs and Raelyn C. and Trace W. Beham. She is also survived by her brother: Stephen C. Zacherl and his wife Deb of Shippenville. Diane was preceded in death by her parents. The family will receive friends from 2 p.m. to 4 p.m. and 7 p.m. to 9 p.m. on Thursday, June 27, 2019 at the Robert V. Burns Funeral Home in Clarion. Mass of Christian Burial will be celebrated at 10 a.m. on Friday, June 28, 2019 at the Saint Joseph Catholic Church in Lucinda with Rev. Joseph Czarkowski, pastor presiding. Interment will follow in the Saint Joseph Catholic Cemetery. In lieu of flowers, memorials or donations can be made in Diane’s name to the Clarion Cancer Center, 150 Doctors Lane #1, Clarion, PA 16214.

Diane M. Ochs, 67, of Lucinda, lost a courageous fight against Myelodysplasia Syndrome on Monday evening, June 24, 2019 at the McKinley Health Center in Brookville. She was born on January 19, 1952 in Pittsburgh and was adopted at the age of... View Obituary & Service Information

The family of Diane M. Ochs created this Life Tributes page to make it easy to share your memories.

Diane M. Ochs, 67, of Lucinda, lost a courageous fight against...

Send flowers to the Ochs family.