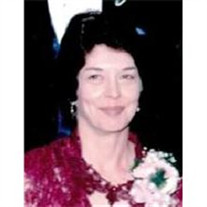 Diane E. Wright, 60, of Scott Drive, Highland Township, died Sunday night, November 29, 2009, at UPMC Northwest. Born January 29, 1949, in Highland Township, she was the daughter of Fred L. and Edna Dolby McCleary of Miola. Mrs. Wright graduated from Clarion Area High School in 1967. She was married on November 29, 1980 to John E. Wright III, who survives. Mrs. Wright was a homemaker and raised miniature horses. She was of the Presbyterian faith. Mrs. Wright loved her horses and grandchildren.  She enjoyed sewing, crafts, and antiques. In addition to her parents and husband, she is survived by children, Curt Wright and wife, Stacy, of Reidsburg; Matt Wright and wife, Jackie, of Miola; and grandchildren, Kyle and Paige of Miola; and Colby of Reidsburg. Also surviving are brothers, Fred McCleary and wife, Diane, of York; John McCleary and wife, Terri, of NC; sister, Deb Clinger and husband, George, of Corsica; Mother-In-Law, Margret Wright of Monroeville; and a number of aunts, uncles, cousins, nieces, and nephews. She was preceded in death by grandparents, Orlie and Orpha Dolby; Father-In-Law, John E. Wright Jr.; and an infant nephew. Family will receive friend from 2 to 4 and 7 to 9 p.m. on Wednesday, December 2, 2009, at the Robert V. Burns Funeral Home in Clarion. Funeral services will be held at 11 a.m. on Thursday, December 3, 2009, in the funeral home. Interment will be held in Miola Cemetery.

The family of Diane E. Wright created this Life Tributes page to make it easy to share your memories.

Send flowers to the Wright family.