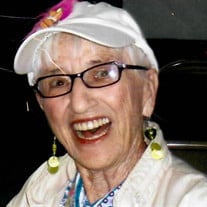 Dolores M. “Dee” Waka, 94, of Clarion, passed away Monday evening, June 24, 2019 at the McKinley Health Center in Brookville. She was born on December 8, 1924 in Altoona; daughter of the late Stephen and Helen Dziarkowski Zakrzweski. Her grandparents, Joseph and Mary Ann, raised her when her mother passed away at a young age. Dolores married Lewis V. Mascitelli, whom preceded her in death. She then married Michael Waka, Sr., whom preceded her in death. Dolores worked as a recreational aide at Cresson State School and Hospital. She was a member of the Immaculate Conception Catholic Church, where she was also a member of the choir. Dolores was also a member of the Polish Women’s Alliance. She enjoyed going to the Clarion Main Street Center, where she was very active. Dolores loved to travel. She is survived by her daughter: Sally Sentner and her husband David of Clarion; three grandchildren: Jennifer Sentner of Venice, FL, Blais Mascitelli and his wife Amity of Salt Lake City, UT, and Amy Mascitelli of North Carolina; two great grandchildren: Blaise Mascitelli of South Carolina and Lewis Mascitelli of North Carolina; and two great great grandchildren: Oaklee and Addison, both of South Carolina. She was preceded in death by her parents; both husbands; her son: Blais Mascitelli; and her sister: Marcella Kaplonski. There will be no public visitation. Mass of Christian Burial will be celebrated at 1 p.m. on Friday, June 28, 2019 at the Immaculate Conception Catholic Church in Clarion with Rev. Monty Sayers, pastor presiding. Interment will be held at the St. Peter and Paul Catholic Cemetery in Altoona. In lieu of flowers, memorials or donations can be sent to the Main Street Center, 516 Main Street, Clarion, PA 16214.

Dolores M. &#8220;Dee&#8221; Waka, 94, of Clarion, passed away Monday evening, June 24, 2019 at the McKinley Health Center in Brookville. She was born on December 8, 1924 in Altoona; daughter of the late Stephen and Helen Dziarkowski Zakrzweski. Her... View Obituary & Service Information

The family of Dolores M. Waka created this Life Tributes page to make it easy to share your memories.

Send flowers to the Waka family.