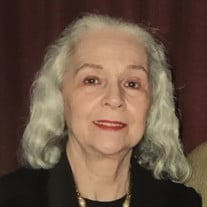 Dolores Elaine Burns Weyand, 86, of Rimersburg, passed away peacefully Friday afternoon, January 19, 2018 at Walnut Creek Healthcare and Rehabilitation Center in Erie. She was born on November 12, 1931 in Red Bank Twp. Clarion County; daughter of the late Albert Sterling and Lucille Dean Hilliard. Dolores worked for a short time in the early 70’s at Erie Strayer Corp, but most of her life she enjoyed homemaking and caring for her four children. Dolores was a Boy Scout Den mother and Girl Scout Troop leader in the late 1950’s. She was a member of the Calvary Covenant Church in Erie. Dolores enjoyed puzzles, photography, traveling, and staying informed about current events and politics. She is survived by a daughter, Pamela S. David and her husband Keith of West Springfield, PA, a son, Rodney M. Burns of Erie, one granddaughter, Paula Irons and her husband Sean of North Carolina, two grandchildren, Brian Irons of Annandale, VA and Jonathan Kerswill of North Carolina. Dolores is also survived by two sisters, Myrtle Steele of Rimersburg and Shirley M. Grant of Sligo, and many nieces and nephews. She was preceded in death by her parents, loving husband of 12 years, Karl LeRoy Burns, two sons, Calvin L. Burns and Karl “Allen” Burns, two brothers, Donald Hilliard and Richard Hilliard, one sister, Annice M. Mortimer, and married briefly to the late James Weyand. The family will receive friends from 11 a.m. to 1 p.m. on Wednesday, January 24, 2018 at the Burns Funeral Home & Crematorium, Inc. in Rimersburg with Services to follow at 1 p.m. in the Funeral Home with Rev. John Milliron, pastor of the Baker Street Church of God of Rimersburg. Interment will follow in the Grandview Cemetery in Sligo. Words of remembrance from her daughter, Pamela David: My mother was a smart, pretty lady. She married her beloved husband, Karl. She referred to him as the basketball star. Karl attended the Sligo High School and played for the opposing team. Dolores was a cheerleader and she attended Union High School in Rimersburg. Dolores was the strength of our family and held us together through the tragic death of our father. My mother always loved to talk with us about any problems we had. She will be greatly missed. In lieu of flowers, the family asks that to honor their mother, donations be made to the charity of your choice in memorial for Dolores E. Weyand.

The family of Dolores E. Weyand created this Life Tributes page to make it easy to share your memories.

Send flowers to the Weyand family.