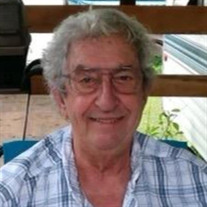 Donald C. “Capt’n” Elder, Sr., 86, of Fisher, passed away on Thursday, January 13, 2022 at his home. He was born on January 8, 1936 in Clarion; son of the late Walter C. and Pearl Confer Elder. Don married the former Mary Lou “Fred” Beck on January 1, 1977, who survives. He was the maintenance supervisor at Clarion University, retiring after 31 years. Don was of the Christian faith. He was a member of the Pennsylvania Gun Collectors and the Ohio Gun Collectors. He was also a member of the Grand Association and the NRA. Don loved to hunt and was an avid fisherman. He enjoyed collecting guns, especially German target shooting guns, and going to gun shows. Don lived his life with great expectations. He is survived by his loving wife, Fred of 45 years; his children, Bambi Elder of Colorado, Ruth Neely and her husband, Dell, of Seneca, Kay Rossey of Strattanville, Lucinda Westre and her husband, Darrel, of Wyoming, Gerald Elder of Corsica, Vicki Elder, David Elder and his wife, Kathy, and Thomas Elder and his wife, Jeanne, all of Strattanville, and Dorothy McFall of Corsica; his step-son, William Beary of Pittsburgh; 15 grandchildren; 18 great grandchildren; his grand-dog, Jackson; and a former son-in-law, Mark Rossey. Don is also survived by his sisters, Ruth Ericson of New Mexico and Carolyn Skinner and her husband, Bob, of Arizona; a brother-in-law, Morrie Lawrence and his wife, Linda, of Warren; along with numerous nieces and nephews. He was preceded in death by his parents; 3 infant children, Kimberly, Joyce, and Joseph; 2 sons, Kevin Elder and Donald Elder, Jr.; a step-daughter, Allison Beary; a son-in-law, James Conner; 2 sisters, Lillie Stovall and Dorothy Elder; 3 brothers, Richard Elder, Leonard Elder, and Chuck Elder; a sister-in-law, Phyllis Elder; and a brother-in-law, Martin Ericson. The Robert V. Burns Funeral Home in Clarion is handling the arrangements. Per Don’s request, there will be no public services. Interment will take place in the Millcreek Presbyterian Cemetery in Fisher. In lieu of flowers, Memorials or donations can be made in Don’s name to the Clarion Forest VNA, 271 Perkins Road, Clarion, PA 16214.

The family of Donald C. Elder, Sr. created this Life Tributes page to make it easy to share your memories.

Send flowers to the Elder, family.