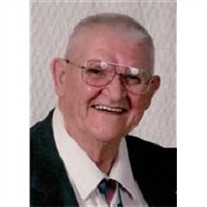 Donald F. Heasley, 79, of Route 322 Strattanville, died Wednesday, June 2, 2010, at the McKinley Health Center in Brookville surrounded by his family after a two year battle of renal failure. Born January 29, 1931, in Clarion, he was the son of Samuel J. and Clare Frill Heasley. He attended the C-L High School. Mr. Heasley served in the Army from 1952 to 1954.  He was stationed in France during the Koran Conflict. He was married on December 11, 1954 to the former Marian Sherman, who survives. Mr. Heasley retired from the Owens Illinois Glass Plant after working for 27 years. He was of the Methodist faith. Mr. Heasley was a member of the Clarion Lodge #277 F & A M and the Coudersport Consistory.  He was also a member of the Strattanville American Legion for 50 years.  He was a member of the Clarion Township Water Authority and was instrumental in getting water to the Day City area. He enjoyed watching sports, was an avid Steelers fan, and enjoyed hunting. In addition to his wife, he is survived his stepmother, Clara Heasley of Country Springs Nursing Home in Sligo; three children, Terri Reddinger and husband, Jeff, of Strattanville; Penni Renwick and companion, Tim Reed, of Strattanville; and Kelli Johnson and husband, Dave, of Strattanville; five grandchildren, Joshua Reddinger and wife, Jenn, of Erie; Nathan Renwick of Delaware; Kristin Reddinger and fiancé, Lars Nelson, of Corsica; and Mitchell and Matthew Johnson of Strattanville; and one great grandchild, Cara Reddinger of Erie. Also surviving are sisters, Doris Miller of Munsee, IN; Phyllis Daugherty of Fisher; and Fred Heasley and wife, Linda, of Strattanville; and sisters-in-law, Donna Heasley of Corsica and Arlean Heasley of Leeper. In addition to his parents, he was preceded in death by brothers, Dan and Dick Heasley; son-in-law, Doug Renwick; and brothers-in-law, Eugene Daugherty and Robert Miller. Family will receive friends from 2 to 4 p.m. and 7 to 9 p.m. on Friday, June 4, 2010, at the Robert V. Burns Funeral Home in Clarion. Funeral services will be held at 11 a.m. on Saturday, June 5, 2010, in the funeral home with Rev. Julie Applegate, pastor of the Strattanville Asbury United Methodist Church, officiating. Interment will be held in the Asbury Cemetery in Strattanville. Memorials and donations can be made to the Clarion Forest VNA, 305 Main Street PO Box 668 Knox PA 16232; American Cancer Society, 320 Bilmar Drive Pittsburgh PA 15205; or Asbury Church, PO Box 96 Strattanville PA 16258.

Donald F. Heasley, 79, of Route 322 Strattanville, died Wednesday, June 2, 2010, at the McKinley Health Center in Brookville surrounded by his family after a two year battle of renal failure. Born January 29, 1931, in Clarion, he was the son... View Obituary & Service Information

The family of Donald F. Heasley created this Life Tributes page to make it easy to share your memories.

Send flowers to the Heasley family.