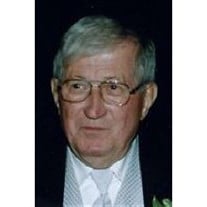 Donald E. McClune Sr., 84, of 8th Avenue, Clarion, died early Sunday morning, January 20, 2013, at the Golden Living Center in Clarion. Born July 12, 1928, in Clarion; he was the son of the late Robert Reed and Mary Dawson McClune. Donald was a 1946 graduate of Clarion High School.  The then attended Clarion University. A veteran, he served in the Navy during WWII. He was married on November 8, 1958 to the former M. Carolyn Kaufman, and she survives. Donald worked for the former Sorce Inc. of Shippenville. He was of the Protestant faith. Donald was a member of the American Legion Post 66 of Clarion. He enjoyed golfing. In addition to his wife, he is survived by a son, Donald E. McClune Jr. of St. Augustine, FL; a daughter-in-law, Melissa McClune of Spring Hill, TN; and three grandchildren, Hannah McClune, Kylan McClune, and Regan McClune, all of St. Augustine, FL. Also surviving is a sister, Mildred Rapp of Shippenville. He was preceded in death by his parents; a son, Dennis L. McClune; and three brothers, Robert McClune, Glenn McClune, and Harold McClune. Family will receive friends from 2 to 6 p.m. on Tuesday, January 22, 2013, at the Robert V. Burns Funeral Home, 638 Wood Street, Clarion. Military honors will be accorded by American Legion Post 66 at 10:45 a.m. on Wednesday, January 23, 2013, in the funeral home Funeral services will be held at 11 a.m. on Wednesday, January 23, 2013, in the funeral home with Pastor Jason Hunter, pastor of the First Baptist Church in Clarion, officiating. Interment will be held in the Clarion Cemetery. Memorials and donations can be made to the Clarion Forest VNA, 271 Perkins Road, Clarion PA 16214; or to the Clarion Hospital EMS, One Hospital Drive, Clarion PA 16214.

The family of Donald E. McClune created this Life Tributes page to make it easy to share your memories.

Send flowers to the McClune family.