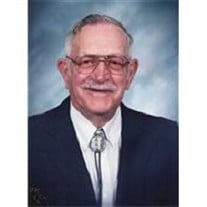 Donald H. Over, 82, of Curll Road, Sligo, died Friday, July 31, 2009, at the Clairview Nursing Home in Sligo. Born April 12, 1927, in Sligo, he was the son of Harold A. and Arveda Elder Over. Mr. Over served in the Army during WWII. He was married on October 27, 1951 to the former Joan Kiser, who survives. Mr. Over worked for the Owens-Illinois Glass Plant as a machinery repairman for over 35 years retiring in 1984. He was a member of the First Baptist Church in Clarion, where he took collection. Mr. Over was also a member of the Quarter Century Club at the Owens-Illinois Glass Plant. He enjoyed fishing, hunting, gardening, woodworking, his horses, spending time with his grandkids, and watching his grandkids play sports. In addition to his wife, he is survived by two sons, Joseph Over and wife, Rita, of Clarion; Stephen Over and wife, Marty, of Sligo; one daughter, Debra Lerch and husband, Tucker, of Sligo; grandchildren, Matthew A. Lerch and wife, Nicole, of Swissvale; and Shawn A. Lerch and wife, Whitney, of Swissvale; Rikki Over of Clarion; Katie Over of Sligo; Renee Over of Altus Air Force Base in Oklahoma; and Missy Over of Sligo. Also surviving are three sisters, Gladys Taylor of Shippenville; Louise Kifer of Sligo; Doris Stiltner of Sligo; four brothers, Ronald Over; Carl Over; Glenn “Windy” Over and wife, Dot; and Vern Over all of Sligo; and numerous nieces and nephews. In addition to his parents, he was preceded in death by one sister, Thelma Benn. Family will receive friends from 2 to 4 p.m. and 7 to 9 p.m. Tuesday, August 4, 2009, at the Robert V. Burns Funeral Home in Clarion. Military honors will be conducted by the American Legion Post #66 of Clarion at 10:45 a.m. Wednesday, August 5, 2009, in the funeral home. Funeral services will be held at 11 a.m. Wednesday, August 5, 2009, in the funeral home with Rev. Keith Richardson, pastor of the First Baptist Church in Clarion, officiating. Interment will be held in the Reidsburg Cemetery. Memorials and donations can be to the First Baptist Church in Clarion or The American Cancer Society.

The family of Donald H. Over created this Life Tributes page to make it easy to share your memories.

Send flowers to the Over family.