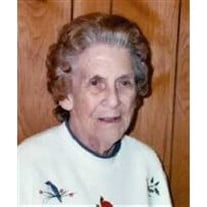 Doris A. Stromyer, 89, of Paint Mills Road, Shippenville, died Thursday, January 14, 2010, at the Golden Living Center in Shippenville. Born January 26, 1920, in Paint Township, she was the daughter of Alvin and Edith Armstrong Baines. She was married on September 13, 1937, to Russell C. Stromyer, who preceded her in death. Mrs. Stromyer previously worked for the Boat Factory, Knox Bakery, and the Quaker Market. She was a member of the Clarion Free Methodist Church all of her life. Mrs. Stromyer loved to bake and baked for everyone. She is survived by five children, Larry R. Stromyer and wife, Betty, of Tylersburg; Shirley Guth and husband, Alfred, of Shippenville; Marie Bish of Shippenville; Donna Fasenmyer of Naples, FL; and Judy Slaugenhoup and husband, Douglas, of Strattanville. Also surviving are two brothers, Bill Baines and wife, Mattie Lou, of OK; and Lloyd Baines and wife, Vicky, of Anderson, IN; one sister, Lois Lauer, and husband, Paul, of Shippenville; twelve grandchildren; and three great grandchildren. In addition to her parents and husband, she was preceded in death by three grandchildren, Rodney and Michelle Slaugenhoup, and Steven Fasenmyer; one sister, Lucille Wagner, and two son-in-laws, Leonard Bish and John Snyder. Family will receive friends from 2 to 4 p.m.  and 7 to 9 p.m. on Saturday, January 16, 2010, at the Robert V. Burns Funeral Home in Clarion. Funeral services will be held at 2 p.m. on Sunday, January 17, 2010, in the funeral home with Rev. William Houben officiating. Interment will be held in the Clarion Cemetery.

Doris A. Stromyer, 89, of Paint Mills Road, Shippenville, died Thursday, January 14, 2010, at the Golden Living Center in Shippenville. Born January 26, 1920, in Paint Township, she was the daughter of Alvin and Edith Armstrong Baines. She... View Obituary & Service Information

The family of Doris A. Stromyer created this Life Tributes page to make it easy to share your memories.

Send flowers to the Stromyer family.