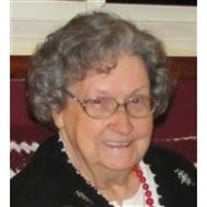 Dorothea Maxine Jeannerat, 90, of Liberty Towers, Clarion, died Friday, November 25, 2011, at the Clarview Nursing Home in Sligo. Born October 28, 1921, in Elk Township, Clarion County; she was the daughter of the late Leonard and Juanita Bullock Johnston. Mrs. Jeannerat was married on March 22, 1947 to Willis Jeannerat, who preceded her in death on March 8, 1983. She retired in 1987 as Elk Township Tax Collector. Mrs. Jeannerat was of the Protestant Faith. She is survived by two daughters, Gloria Kaye Sonoski of Keller, TX, and Teri Lynn Facciani of Knox; and eight grandchildren and six great grandchildren. Also surviving are three brothers, William Johnston of New Bethlehem, Robert Johnston of Knox, James Johnston, Master Chief Petty Officer in Navy, of Clarion, and three sisters, Retha Wells of Liberty Towers, Patricia Summerville of Shippenville, and Elaine Shoup of Knox. In addition to her parents and husband, she was preceded in death by a daughter, Debra Sutherland, a sister, Georgene Fulton, and a brother, Harry C. Johnston, Chief Master Sergeant in Air Force. Family will receive friends from 2 to 4 p.m. and 6 to 8 p.m. on Tuesday, November 29, 2011, at the Robert V. Burns Funeral Home, 628 Wood Street, Clarion. Funeral services will be held at 11 a.m. on Wednesday, November 30, 2011, in the funeral home with Rev. Harold O. Jacobson, pastor of the Grace Lutheran Church in Clarion, officiating. Interment will be held in the Cedarview Memorial Park in Strattanville.

The family of Dorothea M. Jeannerat created this Life Tributes page to make it easy to share your memories.

Send flowers to the Jeannerat family.