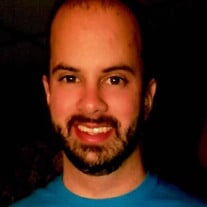 Dustin C. Songer, 31, of Brookville, passed away Friday evening, January 31, 2020 at Penn Highlands Jefferson Manor in Brookville after a courageous battle with Glioblastoma Brain Cancer. He was born on December 22, 1988 in Dubois; son of the late Donald Jay Songer and Lori Beth Myers Songer Wagner of Brookville. Dustin graduated from Brookville High School in 2007, where enjoyed being on the swim team and soccer team. He married the former Lindsay A. Carlson on August 3, 2013, whom survives. Dustin worked at Miller Welding & Machine Company in Brookville, where he loved his job as a machinist. He was a member of the Oakland Church of God in Distant. Dustin loved golfing, hunting, working on puzzles, and spending time with his family. He is survived by his mother: Lori and his step-father: Dr. John Wagner of Brookville; his loving wife: Lindsay Songer and their daughter: Anna Songer of Brookville; two brothers: Joshua Songer and his wife, Heather, of Vowinckel and Taylor Songer and his wife, Tiffany, of Virginia; two nieces: Lailah Songer and Jennifer Carlson; a step niece: Alexy McDermid; and a step nephew: Jeremiah McDermid. Dustin is also survived by his father-in-law and mother-in-law: Dave and Beth Carlson; his brother-in-law: Davey Carlson, all of Reynoldsville; his grandmother: Libby Emery of Brookville; and numerous aunts and uncles. Dustin was preceded in death by his father; his aunt: Kelly Horner; his uncle: Michael Songer; his paternal grandparents: Donald and Martha Songer; and his maternal grandparents: Roy and Miriam Myers. The family will receive friends from 4 p.m. to 8 p.m. on Monday, February 3, 2020 at the Robert V. Burns Funeral Home in Clarion. Funeral services will be held at 11 a.m. on Tuesday, February 4, 2020 in the funeral home with Rev. Jimmy Swogger, pastor of Oakland Church of God. Interment will take place in the Lutheran Emerickville Cemetery. In lieu of flowers, donations or memorials can be made in Dustin’s name to the Dubois Hahne Regional Cancer Center, 100 Hospital Avenue, Dubois, PA 15801.

Dustin C. Songer, 31, of Brookville, passed away Friday evening, January 31, 2020 at Penn Highlands Jefferson Manor in Brookville after a courageous battle with Glioblastoma Brain Cancer. He was born on December 22, 1988 in Dubois; son of the... View Obituary & Service Information

The family of Dustin C. Songer created this Life Tributes page to make it easy to share your memories.

Send flowers to the Songer family.